Drinking with Guided By Voices: Can we Keep Up with Bob Pollard? (Spoiler Alert: No) 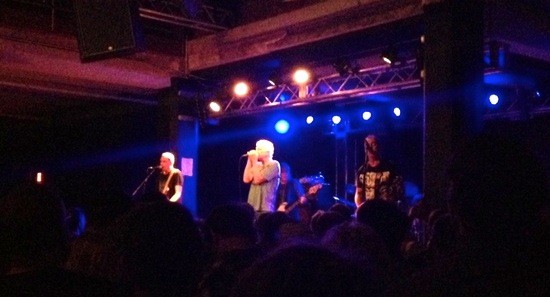 I'm not what you'd call a drinker. Not by any standards. Yes, I enjoy a cocktail or two weekly, but I like to be in control, I like to drive and I already fall down enough as it is -- so booze is not my friend. And while I love sipping on a glass of Maker's Mark (neat, please) and I can always find a good home for a bottle of red wine (my guts), I just can't keep up with you kids and your rock & roll lifestyle.

However, inspired by our Guided by Voices Drinking Game, I decided to go to the GBV concert and get plastered. When in Rome, no?

1.) Don't turn down any drink. (With one exception: grape vodka will not be tolerated.) 2.) Drink. Constantly. 3.) Sing along. 4.) Try not to fall down. 5.) Record the results to the best of my impaired ability.

I temporarily lost my best friend (my iPhone) about an hour before the show. (Don't worry, she's home now.) This panicked search period totally cut into my "pre-gaming" time, so upon finally arriving at Plush, I headed straight to the bar.

A band I like, Détective, was opening and had just started. The always-friendly staff at Plush was in a great mood and the bartenders were feeling generous. By the time Détective was over, I'd already put down two cocktails and a shot. I know it doesn't sound like a lot, but I'm a cheap date.

After a short break, Guided by Voices took the stage and plowed through approximately 300 songs stretched across one set and about five encores. The crowd was full of mostly older, groovy music fans and they all seemed to know each other. People who hadn't seen each other in years embraced and spent time catching up.

In fact, there was a lot of love out there. Drunk dudes were hugging each other and swaying, starting the ubiquitous "GBV! GBV!" chant just as frequently as singer Bob Pollard was doing his trademark high-kicks. And as I was clapping along with a new song off of Class Clown Spots a UFO, I looked around and saw a young amorous couple straight-up fingerbanging on a couch along the wall.

I took this as a sign to drink more and headed back to the bar. Making my way through the crowd, the floor felt uneven, but it was so crowded that I couldn't have beefed it even if I'd tried. From the stage, encouragements to drink came as swiftly as the next short song. Pollard passed a bottle out into the crowd and said "Help yourself. Don't get greedy." When an empty bottle was passed back to him minutes later he was incredulous, smiling and said, "It doesn't even look like the same bottle I passed out there! It's not even the same size!" I kept up my pace and before the first encore I realized that almost all 30 or so of the people that I knew at that show were blotto. And that my designated driver was tipsy. And that the handwriting in my notebook was getting big and loopy. But the combination of good drinks and better music totally took over and at some point I surrendered to the will of our gods from Dayton, Ohio and became one with the swaying, stumbling bros.

I loved every minute of the performance, but if you're looking for a set list, I certainly can't give you one. Check other, more knowledgeable, less sloshed sources. I know that at one point during the set, I thought Man, I think they've already played every song that I could've wanted to hear! and right then they started "Smothered in Hugs." (A personal favorite.) My little crew and I had a glass-raising sing-along along with the rest of the audience. Pollard lifted the microphone and said "Fuck yeah, St. Louis! You fuckin' kick ass!" I'd have to agree. Back atcha, GBV. The show was one for the record books. I'll look back on it fondly just as soon as this hangover subsides.