The Avett Brothers at the Fox Theatre, 9/29/12: Review and Setlist 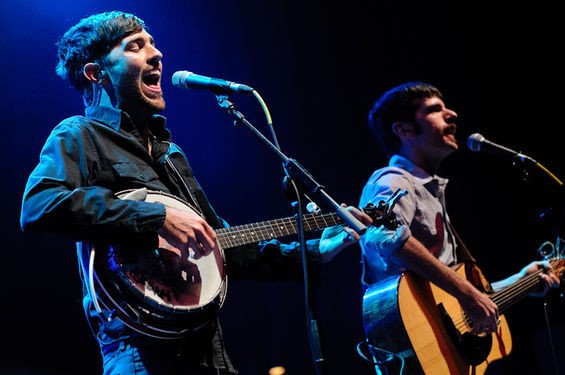 "It's nice to release a new album and have all the hoop-la, but it's nice to be connecting with a crowd. This is what feels real for us," Seth Avett says. It's a reassuring message for fans after the Avett Brothers' recent success on the new album The Carpenter (it hit number four on the Billboard charts), the band's Gap advertising campaign and the statement that the boys have plans to move away from their jam and bluegrass roots.

This musical progression was only slightly obvious at last night's all-ages show at Fox Theatre. Mini solos scattered through songs caused boot stomping and hootenanny-styled hollering through out the crowd while the band occasionally formed round-table huddles instead of playing in a line to the audience.

Perhaps it was the Midwestern crowd in attendance that drove the true folk knee slapping or that it is in fact harvest season. Whatever it was, "Distraction #74" and the full hoedown breakdown in "Laundry Room" made one feel that Fox could be swapped for a country hillside with hay rides in session. The band found an undeniable connection with St. Louis. So much so that Seth Avett suggested we all meet up at Off Broadway following the show (the band played there in 2005 and 2006).

"Die, Die, Die" pleased the crowd as the opener, pulling from the bands 2007 eye catching release Emotionalism. Hits from this album were obvious crowd favorites, such as "Paranoia in B-flat Major," "Will You Return" and "I Would be Sad." They caused sing-alongs and people to jump up and down House of Pain-style.

The Avett Brother's ability to span generations is astounding. Every age group was represented, from children jumping on the seats to twenty somethings sporting AWOLNATION tees to the hip middle-aged and older adorned in vests and newsboy caps. But this was a night for couples and love ballads. Arms wrapped around significant others and sweet kisses between lovers were common occurrences. Per usual, the Fox provided an appropriate ambiance with its ornate decor and vintage curtain.

It was surprising how rock and roll the concert seemed at times. "Head Full of Doubt," "The Perfect Space," "Kick Drum Heart," and others kicked surprisingly hard. Bassist Bob Crawford swapped the stand up for electric and multiple times Seth Avett did the same with the guitar. The stage lighting reflected this, with rich deep colored back lighting that silhouetted the band members between songs. However, this change in arrangements caused a certain musical element associated with the touching nature of their songs to be lost. At some points, the rock and roll felt forced and contrived.

The addition of drummer Jacob Edwards only magnified the rock concert feel. His presence allowed a change of pace and definitely kept the energy high. However, the use of a full kit brought attention to the Avett Brothers' new direction, a change in style. Nothing but praise is owed to cellist Joe Kwon. His contribution to the music was obvious and seemed necessary for the emotional build-ups of certain songs, namely "If it's the Beaches." Without him, the inclusion of the string trio comprised of cello, bass and fiddle in "Go to Sleep" would not have had the same effect.

"Murder in the City" provided a heartfelt interaction between Scott and Seth as they slowed down the pace playing acoustic to a single microphone. Similarly moving was Seth Avett's solo rendition of "Souls like the Wheels." Both were touching in their simplicity and ideally placed within the set arrangement.

Yet the real treat of the show was the encore. "Talk on Indolence" again revived the hoedown and high energy, especially with Scott Avett's high pitched screaming --reminiscent of the end of the Beatle's "Hey Jude." The Avett Brothers then took an extremely traditional folk turn by playing "Shady Grove" and "Alabama Girls" at one mic, center stage.

Does this band really intend to move past its roots? The best song of the night was encore closer "November Blue." Rarely played, this song must have been in response the countless audience members calls through out the show. Let's just hope, wherever they're headed, Seth and Scott Avett don't forget where they came from.

Personal Bias: Two songs made tears well in my eyes from the full musically emotional climaxes, "February Seven" and "If It's the Beaches." Since I am six months pregnant, I blame 50% of this on pregnancy hormones and the other 50% on the band.

Overheard: "I'm having hot flashes. Hello! Is this menopause or am I in love?" - said by a middle-aged man.

Random Detail: There was an unexpected amount of bro-love at this show. Multiple times I saw full grown men grasp each other and say "I love you, man."

Die, Die, Die Head Full of Doubt/Road Full of Promise Living of Love Will You Return? A Father's First Spring Distraction #74 January Wedding Paranoia in B-flat Major February Seven Live and Die Murder in the City Souls like the Wheels I Would Be Sad And It Spread The Perfect Space If It's the Beaches Hand Me Down Tune Go To Sleep Down with the Shine Laundry Room I Never Knew You Kick Drum Heart The Once and Future Carpenter I And Love And You