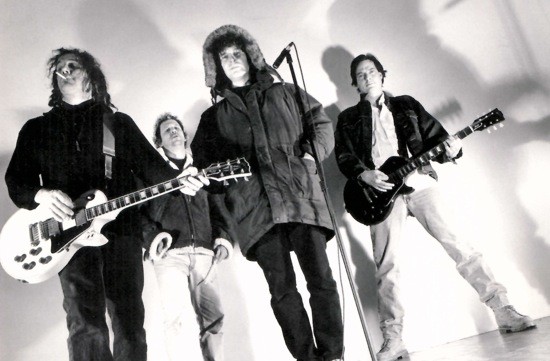 Rock and roll hero Guided By Voices (playing tomorrow night at Plush; the show starts at 8 p.m. and tickets are $25 in advance) has undergone numerous lineup changes throughout its nearly 30-year history. But at least one aspect of the Ohio outfit has remained constant in all that time: its members' insatiable desire for liver-destroying liquids. The personnel on stage at your typical GBV show has little trouble plowing through as many beers as they do songs.

And with a reputation for performing their short, punchy anthems in sets that can stretch well past the three-hour mark, you best believe that the men of GBV have that singularly Midwestern capacity for alcohol that frightens the rest of this nation almost as much as bath salt freak-outs or the idea of affordable health care.

So in honor of these hard drinkin' Middle Americans, we invite you to climb to similar summits of intoxication with our Guided By Voices drinking game. Feel free to play along at its show, but do your best not to "Do the Collapse" on the floor or you'll be playing "Isolation Drills" outside when the...oh fuck it let's just get to it:

Editor's note: An earlier incarnation of this game referenced songs written later in the GBV canon, before the reunion of the current, classic lineup, which don't appear on these set lists. We wouldn't want you missing a chance to get as plastered as possible, so replacements appear below.

Take a drink whenever:

The games continue on the next page. -Bob entreats everyone to sing for the dreams of the weed king. -A member of the opening band joins GBV onstage. -You wonder if GBV's lead guitarist is the same Mitch Mitchell who played drums for Hendrix (He's not). -Bob starts delivering zen philosophy. -Bob mentions drinking during a rant. -Bob mentions St. Louis during a rant.

Take a shot whenever:

-Bob mentions drinking and St. Louis during the same rant. -The band takes a shot together. -The band performs an impromptu cover. -A band member falls over. -Bob mentions the band's past shows at Mississippi Nights (and maybe pour some out on the ground for good measure). -Bob goes on a rant about Mitt Romney. -It appears that a band member is abstaining from drinking (Hey, somebody's gotta pick up the slack. May as well be you, valued RFT reader).

And for those of you with a death wish, here's a couple of special S-S-S SUICIDE RULEZZZ!!! to get you extra donked:

-Drink only Delirium Tremens (At $5 a pint and 8.5% alcohol by volume, it's a cost effective option as well as a recipe for disaster!). -Drink every time Bob keeps his eyes shut for more than 10 seconds. -Take a shot whenever a single band member takes a shot. -Take two shots whenever Bob asks you to call him, maybe.