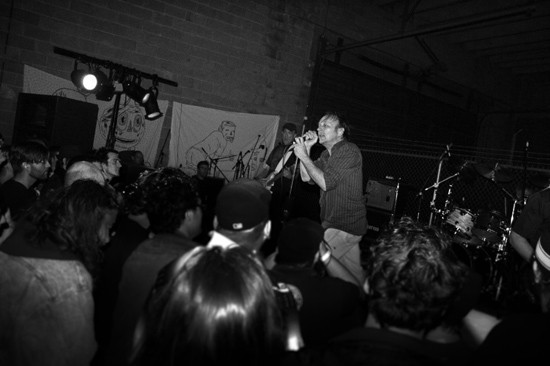 Edged out of the public eye, thirty-plus artists will make their pilgrimage to Louisville, Kentucky to converge on the hot button festival of recent years, Cropped Out. A name that calls on imagery of open pastures and farmland, Cropped Out forcibly cuts out the pillars of corporatism present in popular Summer fests Pitchfork and SXSW in lieu of a singular focus: Independent art. The three day event starts this Friday on September 28, 2012.

"I know all too well how lack of attention to detail, neglect of bands' needs, and general music industry bullshit can result in bands leaving a festival, venue, or town with a bad taste in their mouth." says James Ardery, chief curator for Cropped Out.

Ardery's noise rock outfit Lushes has trekked cross country, performing galleries, basements and bars with wide eyed enthusiasm. Alternative genres such as free-jazz, no-wave and experimental tend to bear more teeth and find themselves in the musical sidelines. Cropped Out builds upon those often dismissed artists while sampling palatable genres for good balance. Ardery keeps his ear to the Earth, a factor that sets Cropped Out apart from its contemporaries.

"We want mainstream music fans to look at this festival as an opportunity to hear new bands that they have never heard of before." Ardery says.

Cropped Out began as a way for Ardery and his associate Ryan Davis to merge the groups they admired, and elevate artists who hadn't broken out of their respective hometowns. This sampling of regional music struck new ground in early October 2010, breaking through with the festival's first outing. Cropped Out scrapped the open lot mentality in lieu of a community sports complex; The American Turner's Club.

"When we were scouting around for venues in 2010 we stumbled upon the place driving around my old neighborhood. I lived less than a mile from this place my entire adolescent life and never knew it existed." Ardery recalls. Turners comes equipped with deteriorating basketball and netball courts, baseball diamond, swimming pool and horseshoe pit.

"It's a blue collar throwback oasis." Ardery says, speaking on the complex that sits nestled on the Ohio River.

Although Ardery spent his formative years in Louisville, he relocated to Brooklyn where music comes nuanced and competitive, especially in promotion. In the past four years, Ardery worked as a club manager, booked for BOOM Collective and set-up independent shows.

"In New York there's a market for every type of music, so I have booked comedians, performance artists, African musicians, noise artists, as well as mainstream pop." Ardery's experience comes multifaceted, and is no doubt a cause to Cropped Out's critical success.

Cropped Out's second year moved to an illegal warehouse space, a common practice in underground regional festivals. The term rave would be downplaying Cropped Out's focus on performance, but the methods of avoiding bureaucracy are common threads of subculture. Ardery confirmed post-punk legends Scratch Acid to close out Cropped Out 2011, and the band performed only to have its plug pulled just short of an encore. 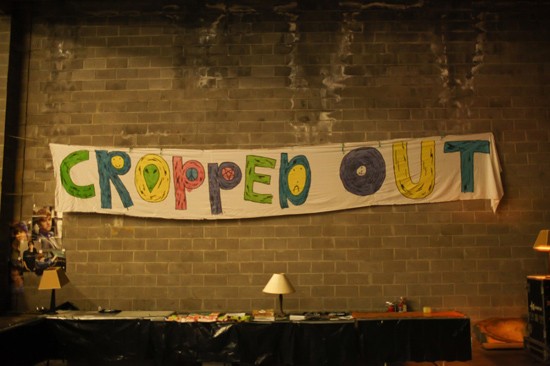 "The chief of police wasn't interested in having them finish their set. Instead of issuing Cropped Out a ticket for noise violation he wanted to also ticket the band members of Scratch Acid directly, which would require them to return to Louisville for a court date." Ardery says. Problems were averted, but a return to the American Turner's Club was vital for Cropped Out 2012.

"After it was all confirmed we started to realize how much these two artists have in common. Both totally do it yourself and both renowned for producing thousands of home recordings!" Ardery says.

Another cornerstone of this year's Cropped Out includes 3-D sculptures and art direction by Mikie Poland. The focus on optical art comes compounded with Tim Furnish, known as Seethings, handling projections and live visuals. Craft vendors are set to share floor space with merchandise from the performers.

While the American Turner's Club works as the primary spot for this year's fest, the final concert takes place on Sunday, September 30, in a much different space. Papa M, Wooden Wand, and Jozef Van Wissem will perform closing ceremonies to Cropped Out 2012 in a nearby cave. While details will be available at the festival, tickets and seating are extremely limited.

Cropped Out includes artists living through an alternate sound, a sample of musical pillars under the mainstream. Champions of underground folk R. Stevie Moore and Jandek share a bill with the oft-praised Lil' B, critical legend Eugene Chadbourne and more than 30 others. The Louisville-based festival offers a singular experience of real grassroots music, born of both experiments and experience.

Visit Cropped Out's official website for a full line up of all three days.