Nick Lowe at the Sheldon Concert Hall, 9/26/12: Review and Setlist 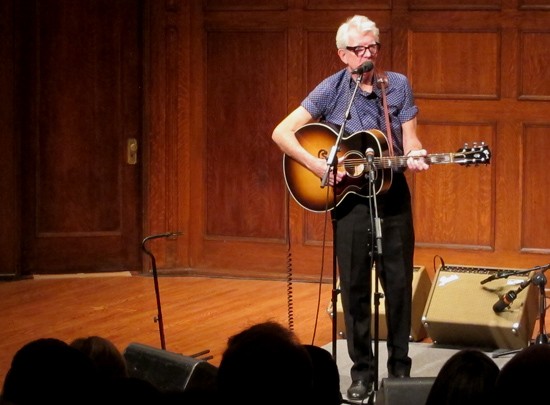 "I knew the bride when she used to rock and roll," sang Nick Lowe to wind down an hour of songs at the Sheldon last night. For its part, the not-quite capacity crowd knew the groom when he used to power, pop, pub and punk, when he used to answer to the title "Jesus of Cool."

Still, no one lamented the lack of a rhythm section, electric guitar or piano. Lowe's resurrection as the "Jesus of Croon" is unarguably one of the great second acts in semi-popular music.

Entering to "Starting All Over Again" by Mel & Tim -- if my ears didn't deceive me -- Lowe stepped into a disc of light and took up a shining Gibson J-200 acoustic guitar, a country-rock instrument if ever there was one, waved off the applause and without a word began with "Stoplight Roses," one of five exquisitely bittersweet ballads selected this night from his most recent album The Old Magic. Regardless of his permutations over a five-decades-long career, Lowe has held to one constant: good songs, always witty, winsome and elegant, even at their most satirical, even at their most deceptively slight or obscure. "You might call them fillers," he smiled. "I call them undiscovered gems."

Standing in crisp black slacks and a polka-dot shirt, sleeves rolled up over the wiry biceps of a public house arm-wrestler, Lowe is the hipster that time forgot, the singer and songsmith that a golden-age of beatnik-jazz balladry might have taken as its king. Second song "Heart" showed off his falsetto, a time-mellowed insinuation on the line "there is no other I can turn to." On this evening, in this hall, Lowe's voice was riveting: a lush, gentle, baritone murmur, and every phrase it touched turned to gold.

And the old cat knows how to work a room. "We've been touring sea to shining sea," he said, "and last night we were in Cincinnati. What a terrible audience. The half-eaten turkey sandwich backstage had more jump than that audience. More like Snoozinnati." Lest such banter make it into print - sorry, Nick - he reminded the crowd that he was only kidding, that he still had a few tricks in those rolled-up sleeves.

From the early '90s obscurity "What's Shakin' on the Hill" to the late-period indulgence "Long Limbed Girl," to "Lately I've Let Things Slide," one of the best torch songs on 2001's "The Convincer," it became clear that all of these tunes -- strummed steadily but so lightly his thumb barely grazed the strings -- are country songs at their core, and never the country of cheap-shot stereotypes. Their form and function, their delicious regret and concise narration, their wordplay and emotional contours, inscribe them all in the great country songbook, right next to the collected works of Willie Nelson, Harlan Howard and Kris Kristofferson.

But the evening wasn't all torch and subliminal twang. The hilariously rakish "I Trained Her to Love Me" had a dead-on Elvis parody and "I Live on a Battlefield" was even more comic, if only for the story about Diana Ross' awkward cover of the song that bought the songwriter a new bathroom. "Cruel to Be Kind," even on just an acoustic guitar, swung and snapped, while "Rome Wasn't Built in a Day" glided along, even without At My Age's studio-pro horns, strings, piano and organ. For one of pop and punk and rock's great producers it must feel a bit surreal to play these songs alone, given all the care he originally lavished upon them.

By the double encore's greatest hits - plus "Tokyo Bay," an original, as-yet-unreleased rockabilly tune - Lowe had fully argued a defense no one demanded. "When I Write the Book" and "(What's So Funny 'bout) Peace, Love and Understanding" -- the former with an unwelcome response vocal from an over-eager patron and the latter with a quite welcome long and loving delivery - set the scene for "Alison," a song written by an old friend, and a final reminder that the coolest cool can be heard in the wisest whisper.

Personal bias: I'm a dues-paying, volunteer DJ at 88.1 KDHX, the station that presented this "Sheldon Session." More importantly, I'm a true believer in the Church of Our Lady of Acoustic Perfection. Nashville has the Ryman. St. Louis has the Sheldon. If you haven't been to this Grand Center institution, currently celebrating its 100th year, your ears haven't really lived.

Overheard: Nick Lowe on the late Andy Williams [Have those names ever appeared in the same sentence?]: "I didn't really know him, but we crossed paths a few times. I shouldn't go into details, but I saw enough to know he was extremely cool."

Opener: None, though rumor had it that Yep Roc label-mate Eleni Mandell would also be on the bill. She was in town, in fact, cutting an in-studio session for KDHX, but this night was all Nick.

Encore: When I Write the Book
(What's So Funny 'Bout) Peace Love And Understanding
Tokyo Bay