There is no merch for sale at a Lil B show. There are five minute conversations with the rapper, where he happily poses for pictures, signs photos, albums, books, bodies and thanks each fan for his or her support. But he's not trying to sell merch -- this is a rapper who shares his music with fans free of cost on his official website. He might fuck your bitch; he's the Based God. Don't ask questions. Let that boy cook.

Last night Brandon McCartney (also known as Lil B, the Based God, the Master Chef) brought his based positivity to St. Louis for the first time with a rare performance at the Firebird (2706 Olive Street; 314-535-0353). DJ Billy Brown (Disclosure: He's an RFT employee) opened the show with a two-hour set percolating house, hip-hop, and trap, including healthy doses of Riff Raff, Flosstradamus, and, according to Brown, "Nerdier music because it was a nerdier crowd." When Brown went on at 7 p.m. the crowd at the Firebird was still thin, but by set's end at 9 p.m., the all-ages show had filled out, buzzing with anxious energy. 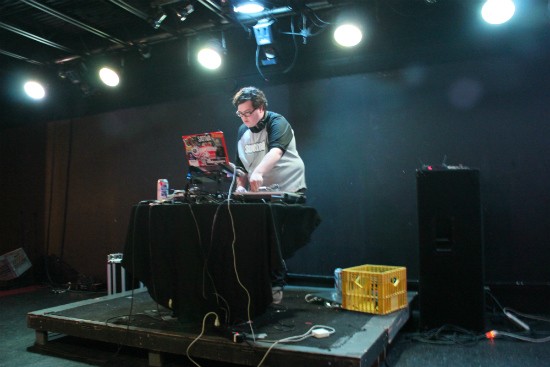 Lil B appeared on stage a little after 9 p.m. in sunglasses and a hoodie -- and throughout the set, proceeded to remove layers of clothing and throw them into the crowd like goddamn Morrissey. Compiling an accurate setlist proved a tricky mission, largely because he performed near 30 songs, largely because his mixtapes and albums flow together in the mind sans clearly delineated titles, but mostly because: "Wait, this is the other other song where he spits the word 'swag' ten times, right?"

That said, the night yielded a solid sampling of Lil B past and present, including "Suck My Dick Ho," "I Own Swag," "Ellen DeGeneres" -- the hook is simply "Ellen DeGeneres!/Swag!/Ellen DeGeneres!/Woo!" -- "Texas," "Swag Jerry Rice," "Woo Woo Swag" and fan favorites "Pretty Bitch" (a song about himself) and cooking classic "Wonton Soup." Halfway through "Wonton Soup" Lil B invited a fan onto the stage, but then somehow, whether through collective misunderstanding or sheer enthusiasm, nearly the entire crowd glommed onto the stage, dancing (ahem, cooking), offering up bitches to the Based God. It was chaotic but overwhelmingly positive, much like Lil B himself. Another concert goer described Lil B fan fervor to rival Justin Bieber -- appropriate, since Lil B, ever reflecting pop culture, has a song titled "Justin Bieber."

When he wasn't cooking, Lil B bounced around the Firebird stage, pulsing pelvic thrusts, hands behind his head, hips swaying back and forth, intermediately through each song. The Based God shared some wisdom, too, quick to clarify that despite song titles such as "Suck My Dick Ho," he respects women, and only wants his dick sucked in a consensual, mutually pleasurable exchange, though, in fewer words: "No means no, don't be weird."

As the all-ages show crashed to a very on-schedule close around 10:30 p.m., Lil B thanked St. Louis for the support one last time and exited the stage. But he didn't go far. For the next hour he stood in the Firebird, shirtless, in sunglasses and a fitted, signing autographs (on paper, skin, and obviously, Vans), posing with fans for photos and connecting with each person who approached him. At one point a fan handed him a thank you letter signed by at least 50 people. Lil B appeared genuinely moved by the flood of love and praise, and seemed excited to meet more members of Based Nation.

Thank you, Based God.