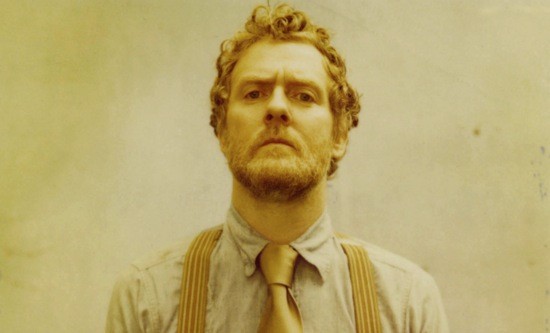 Glen Hansard, with The Lost Brothers The Pageant September 25, 2012

Glen Hansard is a master manipulator. Oh, he doesn't toy with you intentionally, but with lyrics so tightly crafted and rhythms so expertly layered, Hansard can make you feel just about anything. He rips out your heart, uses it for dodgeball and pokes it with a machete before returning the organ to you on a silver platter surrounded by fruits of contrition and hope. You'll hate yourself for bawling during the sonic orgasm Hansard provides but then beg for more.

Backed by members of his band the Frames, Hansard's show at the Pageant last night featured such emotional roller coasters from throughout his career, which went merrily along with the thunderstorm that had raged throughout the evening. Some highlights:

1. At 9:13 p.m., Glen Hansard took the stage with the Frames and headed straight for the piano in the center. With his dark toboggan, denim jacket and grim expression, Hansard grittily contrasted with Colm Mac Con Iomaire's sorrowful violin on "The Storm, It's Coming" and gave this the false impression that this would not be the loose Glen we had come to know.

2. The Pageant [Update, 4 p.m.: The request came through Hansard's management, not the venue, just to be clear] oddly had filled the pit floor with seats and restricted true general admission to the back and side wings. Three songs in, Hansard noticed the silly seating arrangement and requested that the forcibly reserved audience come to the rail to sing and dance. "You're all really dispersed. Feel free to come down and get comfortable. There's a lot of... space," he said, his hand sweeping across gap before him. He promised that he'd "take care of things" if venue staff tried to stop anyone.

3. After a few songs with concertgoers visibly happier and closer to him, Hansard explained why his way felt better than the Pageant's: "There's a difference between an audience and a tribe. An audience sits and pays attention. A tribe comes up and goes, 'Wooooooraaaaaawwwww!' We'd like to play to the tribe."

4. For "Love Don't Leave Me Waiting," Hansard removed his hat and literally kicked it into high gear, ducking and thrusting out one leg as he fiercely strummed and screamed "Show yourself to me!" To the astonished audience's glee, Hansard launched into a bit of "Respect" before smoking out the ending.

5. A woman in the audience was taking so long to snap Hansard's photo that he invited her onto the stage to do so. He gathered up the entire band for cheesy smiles as she took a pic with her Polaroid camera.

6. This audience was very good at playing "Name That Tune," clapping as soon as the very first notes of "When Your Mind's Made Up" from Once rang out. Guests unleashed their roars along with Hansard in the middle of the song in one of those glorious moments where you could almost visualize a lifeline of music zig-zagging through people like those threads in Donnie Darko.

7. Hansard introduced "Low Rising" as being about optimism, "floating around the bottom of the jam jar that is your heart. When it evaporates, you. Are. Fucked."

8. During "Leave," Hansard took his guitar from his shoulder, flipped it over and sang into it. His "la la la" echoed throughout the guitar and looped with electronic embellishment. Standing in the orange spotlight on an otherwise dark stage, Hansard proudly spread his hands wide and smiled as the distorted loop continued.

9. Hansard attacked his guitar strings with such ferocity during Van Morrison's "Astral Weeks" that I thought his hand would bleed. Perfectly echoing the thunderstorm outside, Hansard knocked and picked and growled until he was breathless, even throwing in a snippet of Pearl Jam's "Smile." "Three crooked hearts and swirls all around," indeed. [Hansard and Pearl Jam's Eddie Vedder visited the Fox in 2011.]

10. Confession: That ferocity lead me to believe that Hansard would self-combust like Buffy Summers almost did during the "Once More, With Feeling" episode of "Buffy the Vampire Slayer." Don't judge me.

11. Knowing that Miles Davis was from St. Louis, Hansard asked the band if they could play anything resembling the jazz master's works. The Frames obliged, giving the audience a taste of smoky, meandering cymbals and horn bleats. "Wow. I wasn't even going to try to play along with that!" Hansard said, clearly impressed.

12. Concertgoers ate up "Revelate," one of the Frames' standards that built up to the Iomaire's violin's urgency and swirled the other instruments around it like a tornado. There's that damn storm again.

13. I dare anyone not to cry during "Star Star," another Frames song. The band took the audience on an emotional ride from Hansard's solo beginning through piercing electric guitar slides, from the sorrowful "Twinkle Twinkle, Little Star" violin solo to the hopeful "Pure Imagination" from Willy Wonka and the Chocolate Factory. The song climaxed with bassist Joe Doyle and Hansard trading lyrics and Hansard leaving no doubt about his satisfaction.

14. Alone again on the stage, Hansard pulled the Grand Ole Opry trick of performing without a mic. For "Say It to Me Now," he stomped around the stage with his guitar and let his voice soar without any tricks until Iomaire returned with his violin.

15. Opening band The Lost Brothers returned to the stage as Hansard retreated further back with the Frames. "We're going to try a Bob Dylan song for you in the key of E," Oisin Leech said as the combined bands began "It Takes a Lot to Laugh, It Takes a Train to Cry."

16. By the end of the night, Hansard was feeling saucy. "Here's a Marvin [Gaye] song," he told the audience. "It's real sexy, now. Just a bit of hip and then, if you can handle it, a little shoulder." Hansard showed off that soulful side by gyrating across the stage, slinking and rocking while performing "Baby Don't You Do It," clearly enjoying himself.

17. At 11:30 p.m., Hansard and the band exited the stage with the lights starting to come up and the audience beginning to head to the street as they clapped. But Hansard quickly grabbed a guitar from his entourage and ran back to the stage alone, softly saying "Wait. Some nice people asked me to sing this. I don't sing it so often anymore." As Hansard began his Oscar-winning song "Falling Slowly," The Pageant immediately grew quiet as everyone abruptly stopped to listen.

Here comes the rain again: Hansard remarked on the hard rain a number of times. "In Ireland, it rains all the time, and it's very gentle. It's nice to come here and see some male rain."

Future GIF: My friend Cat noticed a lady dancing beneath the balcony overhang, swaying and twirling to her own beat even as her friend sat alone at a table. She later moved closer to the stage and screamed, "Hey Glen, we've got to finish this bullshit. People ain't moving'!"

Lovin', touchin' and squeezin': Lots of couples were in the audience, holding each other while swaying or knocking heads as they sang lyrics to each other. I predict lots of babies come June.

TMI: The Pageant was astonishingly cold - way more than usual. To put it lightly, this would have been an outstanding night for me to wear a sweater. Brrrr.