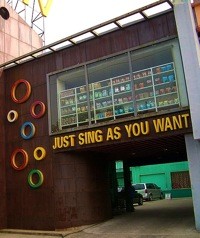 Karaoke can be a dangerous endeavor. What can you sing that won't make friends shun you? How can you go balls-out during your next performance? Each week, RFT Music writer and professional karaoke host Allison Babka answers your burning questions about maximizing your melodies and minimizing your friends' pain. Ask her stuff by emailing [email protected] or hashtagging #rftkaraoke on Twitter.

How do you get your quiet friend to join in on the karaoke fun? Is it OK to submit a song suggestion for them? - (Like a Rolling) Stone

Dude, don't be a jerk. I know you mean well, but unless your friend absolutely loves surprises AND public performances, I'd stay away from secretly putting their name into the karaoke punch bowl. You risk breaching your friend's trust and embarrassing the hell out of her, and for what? A giggle and some peer pressure? Not worth it. Be a better friend than that.

What I suspect you're really wondering is how you can make sure your friend is having a good time when they're at a karaoke bar with you, which is awesome. Honestly, Buddy might be perfectly content playing the loud, clapping cheerleader from the table while you belt out "Mr. Roboto." But if you truly think your pal would have a good time at the mic, you'll have to ease them into it. Once they've demonstrated that they enjoy being around karaoke, suggest that your whole table perform together. Let your quiet friend offer up song options, and assure them they can be Tito Jackson in the back of the group instead of the flashier Michael or Jermaine. If they seem to dig that, gently suggest performing a duet together on another night. And if you find success there, they might just take on a solo without any further help from you. But don't push too hard or too quickly, and don't take it personally if you can't convert them. Some people are singers, some are supporters, and you might just have to live with that.

At what point is it OK to grab the microphone out of someone's hand and take over? Not that I ever did that. During a Hank Williams Jr. song. Because that guy was butchering it. - My "Friend" Is a Mic Hog

Questions to ask yourself before stealing the mic:

1) Is the singer your bestest-bestest friend with whom you've shared diarrhea woes and My Little Pony shopping expeditions? In other words, is this person used to your shenanigans?

2) Has the singer indicated "Dear God, someone come up and help me, please?" through miming or speaking?

3) Is the singer sprawled on the floor, too drunk to continue?

4) Is the karaoke host taking a pee break?

If the answer is yes, then sure, I cautiously recommend lending your voice to their efforts. Otherwise, let them finish their song and don't be a douchebag. Should someone who is noticeably intoxicated be allowed to karaoke? - Drink, Baby, Drink I'll tell you a secret: My job as a karaoke host isn't to get people to sing; it's to get people to drink and, thus, make the bar some coin. Bad renditions of "Don't Stop Believin'" are just gravy. So you bet your ass that every twenty minutes, I'm going to suggest that everyone head to the bar for a beer or four.

Of course, this means that some folks imbibe a bit too much and get ruder throughout the evening. They clap like monkeys and shout requests, and their own songs feature notes that Mariah's dog can't even hear. But depending on the venue, drunk karaoke = fun karaoke. As long as the audience feels safe and appears to have a good time despite the screeching, slobbering mess at the mic, I'll allow it. But if someone becomes a belligerent prick who spits beer everywhere like Steven Tyler in the name of his "performance," I'll cut 'em off. His karaoke turns, that is. Not... other stuff. Usually.

At a recent karaoke party, my fiancee seemed bemused when my whole family pulled her onstage for a group sing-along to Earth Wind & Fire's immortal "September." She was a good sport and recognized the familial bonhomie but clearly does not have the fire for karaoke. Is this a deal-breaker? Let me know before it's too late to get our rehearsal-space deposit back. - 51 Ways to Leave Your Lover?

Dump her and marry me.

No, don't do that. I'm sure she's a lovely girl, despite this astonishing character flaw. Personally, I don't understand it and wouldn't take any karaoke hater for a mate, but that's just me.

Look, no couple does absolutely everything together. I'm sure she has some hobbies you don't especially enjoy, right? Collecting bugs? Picking apples? Tasting pennies? Just because you aren't into the same things doesn't mean you can't be supportive. So leave an article about the rare glaucopsyche lygdamus palosverdesensis butterfly on her pillow, and maybe she'll scream, "You go, honey!" while you rock the mic like a vandal. And then you'll both feel uber-tingly when it's time to enjoy shared activities. Bow-chicka-bow-bow.

Also, don't ask me for relationship advice ever again.