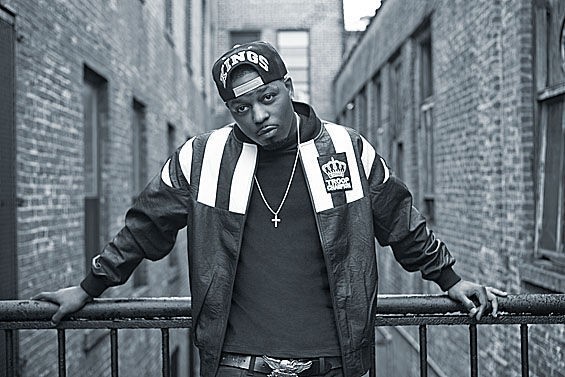 This week's music feature, written by Daniel Hill, is about Fresco Kane, the East St. Louis rapper formerly known as Gena who recently signed with Jermaine Dupri's So So Def label. Kane (nee Greg Lawary) grew up playing any instrument he could get his hands on. He's been around the scene for some time now, and has had some regional success with singles such as "My Dip in the Club." Get educated:

So So Def Debut Single

May saw the release of the Jermaine Dupri-produced single "Hump Wit It," a track featuring a slowed-down sample from 2 Live Crew's "Hoochie Mama," as well as a verse from hip-hop legend Busta Rhymes. The track is fun, a celebratory party banger heralding "hoes" of all shape and sizes. In this case a little misogyny is understandable, given the legendary explicitness of the source material. The music video is forthcoming, and as buzz for the single grows, So So Def will start releasing more and more of Lawary's songs.

Worry not, you readers who fail to recognize that name -- it's not his first. For the last five years, Lawary has operated under the moniker "Genesis the Lyricist," better known as "Gena," generating buzz with singles "Dope Boy Fresh" and "I Dip in the Club." His performances around town include opening spots for heavy-hitters like T.I., Rick Ross and Yo Gotti.

In February, the up-and-comer decided a name change was in order and landed on Fresco Kane. "Fresco" is Spanish for "fresh," and "Kane" is a reference to the lead character in the iconic 1993 movie Menace II Society. Hold your tongue and say it aloud and you may hear the words "Fresh Cocaine," adding a street-hustle edge to the otherwise innocuous moniker. Lawary was also careful to ensure that his would be the only result returned in a Web search of the name, having had issues with the less obscure "Gena."

The Sample that Made it Possible

Kane's recent career boom started in late February, when he and Abe Givens of Starpower Management went to Atlanta to meet with Dupri at the mogul's SouthSide Studios. They were there initially to discuss the then-upcoming mixtape featuring Fresco Kane and Murphy Lee entitled The Best of Both Sides -- a reference to the two artists' geographical relationship with the Mississippi River. (The tape was released on Labor Day and is now available at www.stlmixtapes.com.) The group was listening to Kane's solo work when a track entitled "They Do" caught Dupri's attention. Dupri recognized a sample used in the track, a keyboard line from the 1977 Paul Davis song "I Go Crazy." "I didn't know what the fuck it was," Lawary admits. "But he liked it." Dupri started asking questions about the track, and the ambitious young rapper happily started answering them. Upon his return to St. Louis, Lawary kept in contact and struck up a rapport with Dupri, direct messaging daily on Twitter. Two weeks later Dupri offered to make it formal, and Fresco Kane became the newest signee on So So Def.