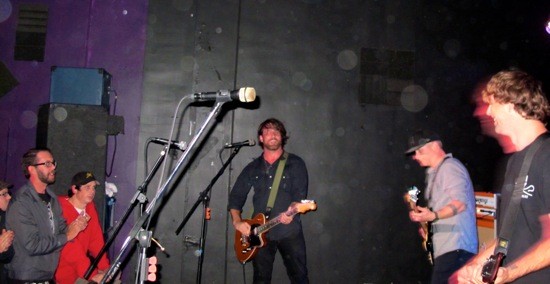 Nostalgia is a word that sometimes gets thrown around a bit too hastily. When a band doesn't record an album, or play a proper show in St. Louis, for roughly eight years, is the anticipation for its return an exercise in reliving the past, or is it just as much an eagerness to celebrate the now? Whether or not this was on the mind of the near-packed crowd geared up for Hot Water Music's show at Fubar last night is irrelevant; it was clear that the band had no interest in getting overly nostalgic.

Not even two minutes into its set, co-singer/songwriter Chuck Ragan hinted as such while screaming, "So no regrets, and no looking back..." as the quartet steamrolled through a rousing rendition of "Remedy." For a band that has put out eight proper full lengths and dozens of EPs and seven-inches, the set list was very much an exercise in celebrating the now. Roughly one third of the eighteen songs played were from the band's newly released Exister (Rise Records). And while some of the dudes sweating it out in the pit may have been growing the same beard they had the last time the band came through, they seemed perfectly fine with yelling along to the new stuff and celebrating the present.

Gainesville, Florida's Hot Water Music went on hiatus in 2005, but none of the members have taken much of a break. Both Chuck Ragan and Chris Wollard have continued to write and record music. Ragan has launched the successful Revival Tour, and tours relentlessly as an amped up folk act. Wollard has released a solo album of his own, and he's getting ready to release another. Bassist Jason Black has played with Senses Fail, and drummer George Rebelo has toured with Wollard's band, and he's sat in with fellow Florida punks, Against Me!.

The band was visibly excited to be back in St. Louis. Having just hopped off a tour supporting Gaslight Anthem and Rise Against, you got the sense that it was comforting for the band to settle in to its own extended set, amongst its own die hard fans. And not enough can be said for those die hards. No less than a case of beer and water was sprayed over the pit while dudes embraced each other, screamed every word sung, and grinned ear-to-ear throughout the set. And when the band launched into the "Rooftops," perhaps the furthest they reached back into its catalog, essentially every body in the pit was interlocked, heads cocked back, yelling at the ceiling. Braddock (featuring members of Disappeared, Ultraman, Machree) opened the show with a raucous blend of melodic hardcore punk with breakneck timing. Fans of singer Bob Fancher's previous band, For the Last Time, will certainly be stoked.

Minneapolis's punkers Off With Their Heads was also on the bill. The band is certainly no stranger to St. Louis, as it has played roughly six shows here in the last four years. Approximately five of those shows have featured different lineups, with singer Ryan Young serving as the only core member. Sadly, last night's OWTH set was one of its more forgettable. Blame it on the mix, on the revolving door of band members, or the fact that it was the band's first night of the tour, but the guitars just weren't synching up with Young's guttural howl. And the howl itself seemed strained.

Times I have seen Hot Water Music since its December 20th, 2001 show at the original Creepy Crawl: 0 (before last night) People I heard bitching that Braddock got to open the show instead of (insert active StL punk band here): 4 Budweisers spilled on my shoes: ~3 Employees of the original Creepy Crawl (412 N. Tucker) present: I counted 4 $50 Hot Water Music jackets purchased: I saw 2 Shots of Jameson purchased for Chuck Ragan by uber-fans: 2 Earplugs I remembered to bring: 2, thankfully. Tour buses parked outside Fubar: 1 (Hot Water Music has come a long way)