Play 'Til You Puke and a Coal Miner Calls you a Faggot, then Keep Playing: The Hooten Hallers 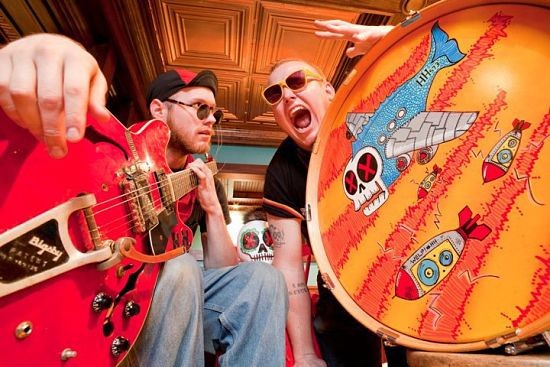 It doesn't take long with theHooten Hallers to realize that drummer Andy Rehm and guitarist John Randall are straight up rock & rollers, blues junkies, self-proclaimed dirtbags (to be taken in the most endearing way possible) and down right Midwestern folks.

But first you have to pin them down between their perpetual tours. The boys have been shaking dust hard this year, but they've still found time to prepare three-song record with St. Louis' Big Muddy Records. Welp City -- the first release in the label's new series of 45 rpm records -- will come out tomorrow: Friday, September 14 at Off Broadway. The Hooten Hallers will play with Bug Chaser, Jack Grelle 'N the Johnson Family and Doormat and Little Rachel.

Luckily, I was able to grab the Hooten Haller boys on their drive from downtown Columbia to "the Dome," a geodesic dome-shaped house in the middle of Missouri country where they kick off their boots while taking a break from the nomadic life of musicians.

Cassie Kohler: The Hooten Hallers are on tour constantly. How much of the year would you say you spend on the road?

John Randall: More than half the year.

Can you give me a snap shot of what it's like on the road with you two? What is your traveling dynamic? I know that constant travel with other people can be difficult and trying.

AR: It's not really hard for us. We spend a lot of time in the car and are hoping to upgrade soon. It's cramped and that part of it sucks, spending ten hours in a vehicle that is totally packed and you can barely see out of the back window. But as far as getting along, a lot of the times the both of us will just sort of zen out and let the drive happen. We both just do the comfortable silence think really and we try to zone out and drive.

You don't have AC in the car right?

So it's hot and you've been a cramped car for a long time. What allows you guys to tolerate that?

AR: Shear determination and will power. I mean, we both know that at the end of the day we are going to be playing a show and it's probably going to be awesome. We feel lucky to be able to do it.

With so much time on the road, you guys must have some stories. What are some of the most humorous or the worst experiences?

AR: There's one that I say a lot because it was just so outrageous. We were in Colorado and I was sound checking and the bar was full of coal miners. I guess that was the thing in that town. They had all gotten off shift and proceeded to get wasted. They weren't people that were going to go to a show, they were just people getting wasted at the bar after work.

So it was just us sound checking to this crowd of coal miners who we'd already heard saying "We don't want no live music." So I checked my mic and I sang like I sing, high. And I hear this guy at the bar go "You sound like a faggot!" And I was just... I was taken aback. I said, "Well, hey man, why don't you just leave then?" And he did. Which was a great personal victory, I guess. We've been really lucky. Experiences like that are so few compared to the number of great crowds we've played: the people that really want to get behind and support independent music, it's really bad ass.

JR: We've met a lot of genuine people and people I consider friends. I feel like we have family in some of these places. We don't get hotels, but sometimes we get to a place and find ourselves with weird people.

CK: Hooten Hallers has couple of repeated phrases, PADOI and WELP. Can you guys explain these philosophies?

AR: PADOI is an acronym for "Put A Dog On It." It means having the most amount of fun possible at any time regardless of circumstance. That's just a good way to live. It doesn't necessarily mean you have to be partying or drinking a whole bunch, but that happens occasionally. But really it's just making the best out of things really. It started with a small group of our friends several years ago and it has been rolling ever since. There are people who say it in multiple states.

JR: It means doing it to the fullest, 100 percent whatever endeavor, fulling owning it. It can be applied to all aspects of life.

CK:What about WELP? AR: "Welp" is an exclamation for any time really. It can be like 'Ah, this is awesome... WELP!' or 'Ah shit, my car broke down... welp.' So I guess "Welp" is an acceptance of the situation whether or not it may be awesome or shitty.

JR: WELP is also an utterance used as a response to anything someone can say to you negative or positive. Usually, it's a party rallying cry or for finding friends in a crowd. Welp City is an off shoot; it's where you are when are PADOI.

CK: Are these a good example of how you live your lives? This is a pretty care free philosophy.

AR: Yeah we try to. I'm the neurotic one, the guy who worries about stuff. But constantly traveling, we would drive ourselves insane if we were worrying about every little detail. You have to resign yourself to not being totally in control, because you're not going to be. You don't know where you are sleeping that night, you don't know how many people are going to be at the show, you don't know if the bartender is going to be a dick or if the door guy is going to try to kick you out.

CK: There is a consistent musical balance between you two on stage; between the drums and guitar and the contrasting pitiches in your vocals. Did the dynamic you guys have just naturally happen?

AR: I always, vocally speaking, sang in a high tenor, but didn't start doing the falsetto thing until a few years ago. Me, playing drums standing up and John playing guitar, we have always kind of tried to have that going on, that kind of balls to the wall thing, because otherwise, people might get bored.

CK: John, you seem to become a different person when you are on stage. Are you possessed while you are up there?

CK: Where does this other side of you come from?

JR: I find it helpful to let go of everything when we are playing. I just kind of zone out. In a way, it's that release of pent up energy; it really is my only release. The element of zoning out and tuning out everything in the room.

CK: Andy, do you feel like you also take on this stage presence or that there is an unnamed stage persona for you? AR: I think we both very much play as ourselves, but maybe an exaggerated portion of ourselves. The aggressiveness and stuff isn't what either of us are like but there is that side to everybody. But the wild boisterous activities, I guess that's a little exaggerated on stage, but we are both kind of weirdos. This lady in Illinois was telling me that the first time she saw us, she said, "John had such a great voice, and you kind of scared me. Oh not that I didn't like your voice, but you were a little scary." So I don't know, maybe there's some kind of weird thing that comes out when we play. But it's definitely not contrived.

CK: Andy, I've seen you play many times and have heard from countless individuals, so I have to ask. What's up with puking during the show?

AR: It's not every show. It's happened maybe three times in the last 200 shows.

CK: I thought it was way more frequent than that.

AR: It used to be, because we get really drunk on stage.

CK: Was it just alcohol? Or does your body just get worked up when you are on stage.

AR: I think it's definitely that [the latter]. Because we don't get all wasted before every show. It just doesn't happen. On a tour where you are playing six nights out of seven, you would just feel like shit if you were getting way too drunk every night and driving. It's totally an exhaustion thing. I sweat like buckets when I'm up there and I'm singing the whole time so that means I'm breathing double time and I'm playing drums standing up, which is kind of like jogging or something. So it does occasionally happen when I get over heated.

CK: Is the 45s the first vinyl the Hooten Hallers' as put out?

AR: Yes, this is the first ever vinyl. It's just three songs from the album we put out earlier this year. We are hoping for a full length next year.

CK: You worked with Big Muddy Records on this project. Can you talk about your relationship with them?

AR: You know, we've been friends with Chris [Baricevic] and everybody who does stuff in connection with Big Muddy and bands that have been released by Big Muddy Records. We've been friends with that whole crew for a long time, so it just feels like family really. We were in a spot and we weren't going to be able to put out a record and Chris came and saved the day.

CK:How'd you guys team up as a group?

JR: We met in Columbia [Missouri] and started to hang. Andy and I kicked around the idea of playing open-mics, then did some recording and went from there. We never wanted to get a bassist; we're pretty happy with the two-piece thing.