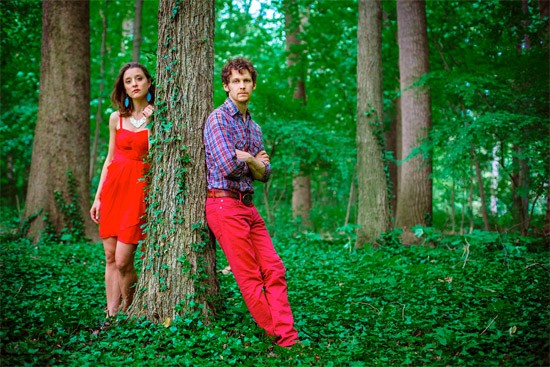 For as stiff and coy as the band's name may be, the David Wax Museum's hybrid of indie pop, folk and folkloric music flares with smart sonic ideas and timeless and in-the-moment images. Born and raised in Columbia, Missouri, Wax (that is his last name) still has family in University City and still has a light Missouri twang in his voice. But the music he has been making since last year's cut-through-the-indie-folk-clutter release Everything Is Saved and this year's even more cutting Knock Knock Get Up is animated by a deep connection with Latin music, especially the string-band trio sound of huapango, which Wax absorbed while living and studying in Mexico.

The obvious analog to the David Wax Museum's sound is Calexico, but a clear difference lies in the rhythmic power of Wax's "army of jaranas," the wheeling voice and quijada (donkey jawbone) percussion of partner Suz Slezak and a coalition of equally-adventurous musicians who make Wax's dance and truly sing.

I reached Wax on the phone prior to his band's appearance at Off Broadway on Wednesday, September 12.

Roy Kasten: How does a young man from Columbia, Missouri get interested in Latin American culture and music?

David Wax: I studied Spanish in junior high and high school in Columbia and I had a few important people in my life who were from Latin America. I got an exposure at a pretty young age, but after my first year in college, I had an opportunity to do volunteer work in Mexico. That's where I really got interested in the culture, history and politics. I spent the summer down there and got interested in Mexican folk music. That was the summer of 2001.

Was that live performances or tapes and records?

It was pretty much all live, community folk performances, people who were getting together for a dance, these huapango trios, would be an essential part of that. There was a thriving folk music culture. It's such an inclusive way of interacting with music. It's really lively and I was taken in by it right away.

There's a lot of regional variation in a country as big as Mexico. Was there a specific sound that was popular in the state you were in?

Son Huasteco or huapango. That's the folk music that's indigenous to that region. Those trios, they're exposed to other types of music, they'll play rancheros or norteño songs, or even cumbias, but the bulk of their repertoire is these traditional sones as they call it. That was the gateway for me to the whole complex world of Mexican folk music.

Can you describe the core features of that music?

What's interesting about this new record [Knock Knock Get Up] is that it has more instrumentation that comes from Son Huasteco, but in the past and in general the son jarocho music has been more influential, from the South and Veracruz. That has a more syncopated rhythm that comes from the African influences, from the African slaves who worked in the sugar cane fields in Veracruz. It's all string-band music, so as opposed to mariachi music there's no brass. It's mostly 6/8, it's all dance music, almost a Mexican clogging style of dance, on a raised wooden platform. It has call and response singing, general songs about love and the natural environment.

David Wax Museum: Will You Be Sleeping, Part 1 from Harvey Robinson on Vimeo.

How long did it take you to go from being a fan of the music to feeling like you could play this music confidently and integrate it with your songs?

It took a long time. I was a fan from 2001 to 2006. And then I went back down after I graduated from Harvard. I had a fellowship to study Mexican folk music and that's when I tried to learn to play it and approach it as a musician. I learned to sing the songs and built up a repertoire of music. That whole year still feels like a daunting enterprise. I didn't grow up with that tradition. I'm just a folk musician, a singer-songwriter. Some parts come intuitively, but it's complicated music, and it takes a lifetime to play well. The deeper you get into it the more you appreciate it.

That led to a realization that there are other ways to be inspired by this music, to have it influence my own songwriting and the music I want to make. There was a transition from the music influencing my songwriting to thinking about new instrumentation in my band, and then introducing that to the musicians, having them develop their own relationship to it. Coming back to Boston, I realized that the most authentic way of interacting with it was respecting the distance between where I come from and what the music is, to let it be a passion and inspire what I'm doing.

One of the critical digs at singer-songwriters is that they lack rhythm. But as a singer and songwriter the folkloric tradition changes that for you. Rhythm becomes central.

We try to embrace that. It takes the music to a different realm. The rhythm becomes a backbone, the record is really focused around percussion. The jarana, which is what I play, it chugs along but in a really particular, syncopated way. Not always, but we layer that on. On a lot of songs it's an army of jaranas, six different sizes, so it's a blast of rhythm. I've always been drawn to that approach. Paul Simon did that in such an incredible way on Graceland and Rhythm of the Saints.

I think the electric guitar ties that in. We're using a lot of different Mexican stringed instruments on that track, but the electric guitar gives it a different energy and tone. There are bands like Vampire Weekend who use that African guitar tone, and we wanted to acknowledge the same source, but we didn't want to duplicate that.

Tell me about your recent trip to Shanghai.

We were invited by the University of Shanghai for Science and Technology. That was because we played a show in Grand Forks, North Dakota. A woman who had heard about our performance there was involved in the American culture center at the University of Shanghai, and she was looking for a band to introduce American music to her students. They brought us over for ten days in March. It was an incredible trip. We'd never been to China, we didn't know much about the culture, but we felt like people connected to the music. The spirit of it really translated. It was a pretty wild experience.