The Best of An Under Cover Weekend at the Firebird 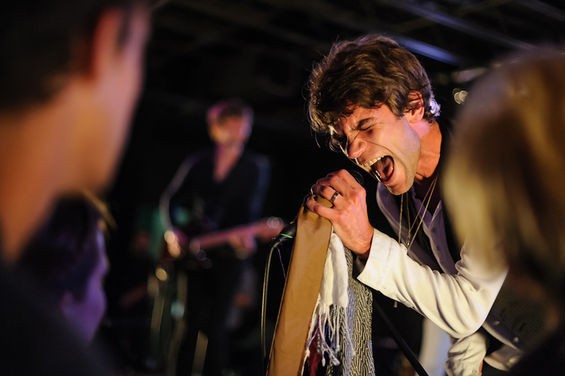 An Under Cover Weekend is a time to get silly, abandon caution and get lost with ten St. Louis bands in some of the most loved music ever. Many of us will never see Aerosmith in concert. The majority of the two sold-out crowds missed Michael Jackson. And here they are, in joyful incarnation. Just for St. Louis.

AUCW, more than most other shows, is a spectacle, a two-night cover extravaganza studded with goofy and inspired moments. Here are eleven:

Best Use of an English Accent: The crowd couldn't help but guffaw every time Aquitaine's Will Hildebrandt spoke. In full-on mind meld with Liam Gallagher, Hildebrandt teased the audience, "Do you wanna heah "Champagne Supuh-no-vah"? DO YOU WANNA HEAH "CHAMPAGNE SUPUH-NO-VAH"? Well you cuhn't. Et's tooh lunhg of uh suhng!" An audience member was overheard saying, "I'm beginning to believe he is Gallagher." Crowd members were seen Instagramming pictures of themselves with "Oasis." To us, the band was in the building.

Expect to See on More Playlists: PJ Harvey. The audience howled in rapturous praise, possessed by the band's energy, when Animal Empty paused between songs. It felt like an authentic rock show. Like something dangerous could happen. When Ali Ruby, a statuesque blonde who looked beautiful a Camaro-red shift dress, introduced the last song, there was a palpable hunger for more.

Probably Made a Baby Post-Show: A couple began grinding aggressively during Humdrum's riotous version of Beck's "Debra." The young man and woman in the front row slammed themselves together and shifted back and forth throughout the song while the band sang, "'Cause only you got a thing/That I just got to get with/I just got to get, get with you." When Humdrum hit the chorus, its chutzpah jumped into a falsetto feeding-frenzy sincere enough to give power to a song steeped in whacky lounge-funk.

Most Likely Invited Back to Stage Crash: Volcanoes played at warp speed, probably caused permanent hearing damage and, as percussionist/vocalist Eric Peters later said, found the "rage" in the Killers' best known songs. Peters, bassist Jon Ryan and temporary synth man Charlie Brumley hammered out blunt-force versions, and eventually sought front-row friends for "All These Things That I've Done," leading them and the audience through the refrain: "I got soul but I'm not a soldier." Onstage, Chris Phillips of Bear Hive hopped around Peters' drum set singing and screaming, happy as a clam.

Stunned Silence: The crowd, surprisingly decked out for the occasion in button-downs, dresses and the comfiest of secondhand couture, appeared content to absorb LucaBrasi as it generated U2's grandiose sonic waves. Perhaps a bit quieted by fatigue, the audience stood in calm appreciation. LucaBrasi did its homework and delivered a spot-on rendition of one of the most ambitious bands of the weekend.

Bands Not Covered: Members of Bo and the Locomotive, Union Tree Review, the Blind Eyes, Bear Hive, Old Lights, Pretty Little Empire, Sleepy Kitty, the Orbz, the Union Electric, Nee, the Jump Starts, Illphonics and [insert familiar face here] came out to support AUCW. For those who had played before, the experience of being a fan was a little disorienting. "This is the first time I've come here and haven't played," said Jordan Howe of Union Tree Review (previously Under Cover as the Postal Service and Marvin Gaye) . "I don't know what to do. I guess I'll just stand here, get drunk and Tweet. Things I was born to do."

Best Present: Two fans walked away with shirts printed with "Fuck Factory Farms" during Last To Show First To Go's accurate-down-to-the-ethics Neil Young tribute. Frontman Bredon Jones, wearing the chops and everything, yelled, "Fuck consumerism. These shirts are free!" and accidentally pelted an audience member with an errant T-shirt. Better not blink.

When Choreography Checks Out: Palace as ABBA was, in the words of Firebird owner, Mike Cracchiolo, "picture perfect." Jamie Finch (in her last appearance with Palace) and Sydney Scott's choreographed moves, a mixture of ABBA-hued synchronicity and young lady shaking, inspired the crowd to boogie with some back-up help from Scarlet Tanager's Susan Logsdon and Jordan Shepherd. We ate it up, busting out our inner Dancing Queen throughout the pristine set.

The King is Not Dead: The audience crammed around the stage prior to Dots Not Feathers' sensational Micheal Jackson set. People were vocal in their desire to see MJ. When Katy Durrwachter sound-checked the chorus of "Billie Jean," the audience roared in approval. The band's members paused theatrically to put matching sequin gloves on their hands: one of many flourishes scattered throughout the set that caused the audience to squeal and shake with giddiness. Accompanied by the undead (a professional dance troupe in zombie face paint) we threw ourselves into "Thriller." We danced and sang along with every word that came out of DNF's prodigious pipes. All that gyration turned the Firebird into a glowing sauna. Once the set was over, people fanned their faces, hunted for water and found salvation in the mercifully chilly Saturday night.

Women Love Aerosmith: Steven Tyler has a voice clearly designed to make women swoon. It is explosive -- a firework on Independence Day. Fortunately, Via Dove's Andy Shadburne is also equipped with a righteous wail. And he can also tear around the stage like Tyler in the '80s. No one was into the Via Dove's Aerosmith set more than middle-aged women scattered around the Firebird. They clung onto their dates and belted bits of "Dream On" at maximum lung capacity. They led a chorus of throaty caterwauling between songs. And as an Under Cover Weekend came to an end, the assembled crowd of regulars, friends and St. Louis scene tourists alike fist-pumped, held up devil horns and left for home with smiles they probably still have plastered on their faces.