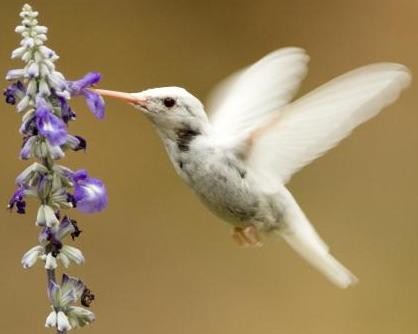 Last week, our cohorts at Daily RFT brought you the story of an albino ruby-throated hummingbird, or maybe a pair of them, seen in northeast Missouri. The exceptionally rare species is easily spotted by predators and is therefore a small population that dwindles every year. The hummingbird, with its precision and grace, has long inspired all manner of artists, musicians very much included. In honor of this beautiful and likely short-lived oddity, we give you six songs in tribute to the hummingbird.

6. Les Paul and Mary Ford -- "Hummingbird" The late, great Les Paul wasn't always looking the future. Here he is with his wife, Mary Ford, singing a song written by Don Robertson. In so doing, the family Paul joins such luminaries as Lorne Greene, Hal Blair and one Elvis Presley, all of whom recorded songs written by Robertson.

5. Leon Russell -- "Hummingbird" Leon Russell committed his tribute to the tiny bird (and its metaphorical value) to tape on his debut, self-titled solo album in 1970. Strongly recommended: BB King's cover, which he played on Letterman.

4. Paul McCartney -- "You Tell Me" Maca has always been best in Silly Love Song mode. That's the thematic starting point for "You Tell Me," which heads off toward wistfulness with beautiful results. Plucked from the long, long, looooong tail of the legend's career. There are other winged beasts with mention, but the hummingbird bats cleanup. 3. Johnny Winter and Dr. John -- "Right Place, Wrong Time" We're guessing Johnny Winter has fewer natural predators than his pale little cousin. But he stands out just as well, particularly with a guitar in his hands. Here he is with Dr. John, who you may recognize from a stage on the banks of the Mississippi last weekend. Johnny, meanwhile, will be sighted at the Wildey Theatre in Edwardsville, Illinois next Wednesday, September 12.

2. Rolling Stones -- "Angie" The Gibson Hummingbird is one of the most storied acoustic guitars every crafted -- it is favored by Sheryl Crow, T. Rex's Marc Bolan (who used a ripoff version) and Jimmy Page. And, of course, Keith Richards, who used it almost exclusively for his acoustic needs.

1. The Song of the Hummingbird Mother knows best.