On Friday afternoon, rain was falling in a solid wall on St. Louis, and Isaac loomed fairly apocalyptic on the radar. Not the best conditions for outdoor activities of any sort. And potentially disastrous for the Big Muddy Blues Festival, which was already taking something of a home run swing with double its previous year's budget and a headliner to match in Dr. John.

So folding wasn't really an option. It took some ten months to organize a festival with three outdoor stages; Laclede's Landing Merchants Association's Executive Director Emily Kochan and the rest of the Big Muddy team had two days to rebuild the festival indoors.

Of the five Big Muddy Fests Kochan has spearheaded, she says this was by far the hardest. After moving the first day indoors, she decided to risk the rain on Sunday. "I thought, 'You know, we're just going for it,'" she says. "I did my anti-rain dance."

It was a risky move, because if the storm had shifted or the rain had hit hard, it would have been nearly impossible to move the acts back indoors. She might have ended up with no Big Muddy, right after setting up two of them.

But that's not what happened. The rain proved little more than a nuisance and the crowds turned up. "It's a euphoric feeling," says Kochan. "I'm relieved I finally get to rest."

Todd Bolton has been working various festivals for the last decade, wandering around the country and taking in the sights. The place he's spent the most time recently is New Orleans - home of Dr. John. He came to volunteer at Big Muddy after hearing about it from a friend in Columbia. "I've only seen Dr. John at Home Depot or on the street - never in concert," he says.

Bolton has a prodigious beard - so prodigious he says he had people coming up to him on Laclede's Landing asking to rub it on their faces (booze: probably a factor). In his travels he's encountered every possible reception for his hairy face - he singles out Colorado and Wyoming as particularly hospitable in that regard. And St. Louis he declares "fairly beard friendly." 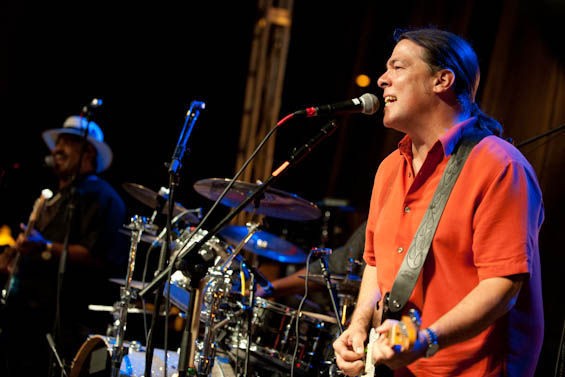 If it is fairly beard friendly, St. Louis is exceptionally blues friendly. John Fohl, who plays guitar and sings with Dr. John, says it's got a particular place in the hearts of he and his band mates. He recalls playing St. Louis on the night they won a Grammy, and one where they jumped into an impromptu jam session at Broadway Oyster Bar. But for Fohl, it's all about the pedigree. "I love St. Louis because Chuck Berry is from St. Louis," he says. "He wrote a big chapter in the book of my life."