Dan Deacon will play the Firebird this Sunday. It will be a good time; in this week's print issue RFT Music writer Ryan Wasoba gets you up to speed: "The solo performer built a reputation making tongue-in-cheek electro pop and treating his shows like enormous games of Simon Says."

But Deacon has more on his mind than getting his crowds moving. Long an outspoken critic of political and social apathy and a figurehead during the Occupy movement, he appears on the cover of this months' Under the Radar Protest Issue, and within he holds a sign with the slogan "Kill Monsanto."

Buy the Protest Issue of Under the Radar Magazine

This isn't the first time the Baltimore artist has spoken against the St. Louis-based corporation -- in fact, his 2009 album Broomst was in part a specific protest against Monsanto. In an April 2009 interview with the A.V. Club, he articulated his concerns:

A lot of the tracks focus specifically on the [real] company Monsanto, and the idea that they're controlling the world's food supply in an insidious plan to starve everyone for the gains of the New World Order, which should be eradicated. I'd like to articulate all that a bit better, but, well, when I'm drunk I like to talk about this stuff a lot more.

The Under the Radar feature explains Deacon's evolution, both since Broomst and the longer, more dramatic changes in intent he has experienced since gaining widespread popularity with Spiderman of the Rings. He is seen elsewhere in the issue (which features several artists espousing various causes ranging from the deadly serious to the whimsical) holding signs that say "GMO food labeling NOW" and "Drones exist. They kill people -- innocent people. We allow it."

The feature itself is well worth a read -- if you're going the show this weekend or even if you're not, we recommend you pick up the magazine and look through it.

Ryan Wasoba's full preview of Sunday's show, as well as the Dan Deacon Under the Radar cover and a stream of "True Thrush," are on the next page. 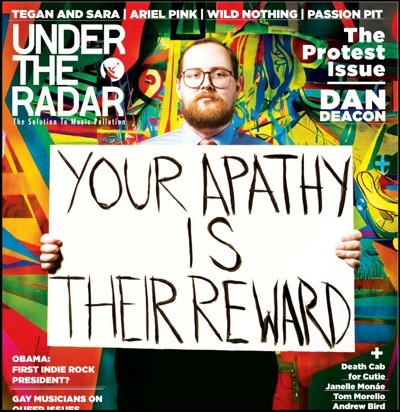 Wacky, quirky, eccentric, absurd. Use whatever word you like to describe Dan Deacon, but know it is not the be-all, end-all of his being. The solo performer built a reputation making tongue-in-cheek electro pop and treating his shows like enormous games of "Simon Says." With 2009's Bromst, Deacon derailed suspicion that he might be a novelty act by spotlighting the intricacies that previously hid under the surfaces of even his jokiest songs. The pattern continues on America, his most serious, artistic record yet, capped off by a four part suite that sounds like Philip Glass programming a J-pop album in Fruity Loops. Worry Not: Even at his most mature, Dan Deacon is still a hell of a lot of fun. His Firebird show with a band billed as the "Dan Deacon Ensemble," is certain to be a spectacle.