The Flaming Lips at LouFest, 8/26/12: Review, Photos and Setlist

"Fuck the rain," says Wayne Coyne at the beginning of the Flaming Lips set last night at LouFest. It was an appropriate if not re-energizing way to kick-off a set delayed 35 minutes due to a torrential downpour coupled with lightning; a set some LouFest-ers feared wouldn't make it out of the muck and mire. The festival-closing set drew a larger crowd than any other act that weekend, and also felt the brunt of a storm that had loomed large over Forest Park for the festival's two-day breadth.

At 8:35 p.m., on the heels of Dr. Dog's abridged (but thoroughly fun, rousing) set, the Lips took no pause to fully throw the crowd into their psychedelic carnival, opening with "Race for the Prize" and glitter guns (and confetti cannons) blazing. Clad in a large fur scarf, Coyne plays enthusiastic ringleader to the group's on-stage spectacle, begging fans to dance more, shout louder, rock harder.

Perched at the front of the stage -- on the Lips' special extended platform -- below a spinning disco ball and laser show, Coyne slays confetti-filled balloons with his guitar, while others float among the audience, occasionally bursting to offer a decidedly more festive shower. A giant costumed catfish and star appear on stage, as do ladies dressed in Dorothy dresses, and in the audience fans play their parts with bunny and banana costumes, roaming the crowd.

Wielding a smoke-blowing megaphone, Coyne saturates the stage in a hazy film before performing another fan favorite, "The Yeah Yeah Yeah Song." Pull out your Flaming Lips Bingo Card, because the end of this song sees Coyne enter that signature hamster ball bubble, rolling around the audience, at times standing, at others on his knees, bandied about by a gleeful LouFest.

Next it's "Is David Bowie Dying?" played by Coyne with his bubble guitar, and with his every move projected on the stage's backdrop from a camera attached to the mic stand. It's an up-close and slightly jarring perspective, but it's absolutely the Lips. The group dials down the decadence for a song with "Ego Tripping at the Gates of Hell," as lasers cast a long line through the festival grounds, catching and illuminating errant strings of ribbon streamers like overhanging jellyfish. 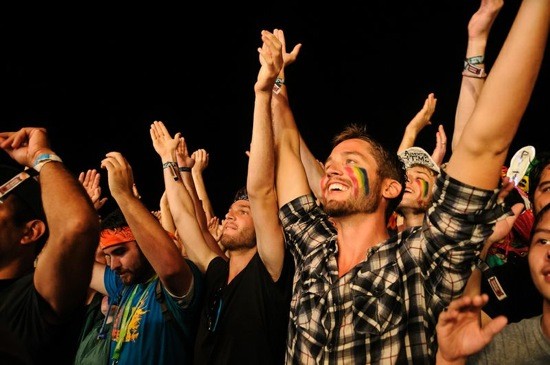 "See the Leaves" follows, as does a series of newer songs and their visual accompaniments. Sliding on a pair of giant green hands that channel the Incredible Hulk, Coyne shoots lasers into the disco ball as the mirrored orb reflects them back. He then turns to the crowd to share the green, Tron-like laser light with everyone. Before "Drug Chart," from the group's 2011 EP Gummy Song Skull, Coyne gives a public service announcement (literally, he says it's a PSA) to say that, "Studies show that smoking marijuana leads to smoking harder drugs...like cigarettes?"

The trippy ride continues with "What is the Light" and "Ashes in the Air" (the latter a collaboration with Bon Iver), then the Lips exit the stage, goading LouFest to beckon them back. The encore is simple, the heart-swelling "Do You Realize??" with all its magic and tenderness, its kinetic positivity multiplied by the goodwill and graciousness of the Lips under LouFest's grateful gaze.

The Flaming Lips at LouFest: Setlist Race for the Prize The Yeah Yeah Yeah Song Is David Bowie Dying? Ego Tripping at the Gates of Hell See the Leaves Laser Hands Drug Chart What is the Light? Ashes in the Air Do You Realize??