Escalade represents a foul mash-up of noise and rap music. Not rhythmic static or choreographed feedback, Escalade's songs shows a keen ear for tonality where songs have become occupied spaces of thought. We're not talking about hyper produced hip-hop or hardcore ghetto-spit, but pop songs coming from the wrong side of the tracks. There's a personal hue to Escalade's style, one that could be passed off as confused but quickly becomes personal with a closer listen.


2012 has been a year of transition for Escalade, as he's held off on releasing a third album and has ushered in an additional member and a new sound for the future. Escalade recently sat down with us to discuss these changes and his thoughts on composing such an odd hybrid of electronic music. Although his secret identity is easily deciphered via any research on his noise band Catholic Guilt, we'll refer to the man himself as Escalade.

Joseph Hess: When did you start working on the project that would become Escalade?

Escalade: Some of the stuff on the first album is three years old. Some of the beats I did a long, long time ago and I didn't really make anything out of them. I don't know when it started exactly. My first show was about one month after I posted the first album online in January 2011.

I assume you had some sort of electronic project in mind before?

It was more just a thing that happened. I acquired some software just to make electronic stuff because some of those elements have been in Catholic Guilt pretty much since the beginning. Some of our earlier sets were us playing to loops. One of the first sets we played was us going over a two second sample of some harmonica from a Jandek song that I just slowed down a whole, whole lot and I layered on top of it. That software is really made for pop music, and it's really easy to make stuff like that so I just whipped it up. It's really easy to make a beat on the software that I used. It's not challenging at all. That's why everybody should do it!

This electronic music began first to augment Catholic Guilt and you branched out into making these songs that sound very focused. When did you decide that you were going to perform as a solo artist?

To be totally honest, I don't know when I decided this, but I decided I should just do something as just myself. My original thinking was, "Yeah they pay pretty good at the Tap Room, if I didn't have to split that check four ways it would actually be kind of awesome!"


When you brought the music from a studio environment to a live environment what was the idea behind the aesthetic and what you like to portray visually?

It's from going to a lot of really shitty hip-hop shows. Even seeing dudes that you really, really love. You go to a show and this dude raps over his iPod, and not even the instrumentals, but the songs themselves. It's not that far off from what I'm doing, but that's something I want to change in the future. That's why I went on hiatus, to think about that and how I want to involve more elements of improvisation. If all I'm going to be doing is singing over an iPod, more or less, I want there to be something else to put some sort of blood in it, to a certain degree. I really don't know what it is that I do, it's just this sort of character that switches on. These are parts of my personality that are buried deep down inside, and this is some sort of outlet for them.

The performance has a kinetic energy, and it's narcissistic in a way.

Not in a way that's off-putting. It's great to watch, and fits the music well.

That's the thing that I love about hip-hop. The braggadocio of the whole thing, it's this idea of the projected self. The idea that you're pumping yourself up to an extreme degree, that sort of stuff entertains me.

What was the central idea behind the first recordings you put out?

You mentioned that the second release, Encounters, takes a turn for the darker side?

There are some songs on that record that are a couple years older too, songs that I developed over the course of time. I was super-depressed around that time, and the album was a byproduct of that. I was feeling very alien and very disassociated from everything. This is why I should finish the third album, because it's not supposed to be a downer. All of the really meaningful, personal stuff is sort of buried in there, and I don't really like when people do that, but I did it on this second album. I was just depressed and drinking a lot. 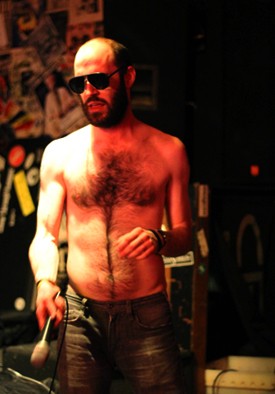 How long has this third album been near completion?

In all honesty I haven't really worked on it since I moved. I got Jake Jones and Taylor (from Bug Chaser / King Kong Magnetics) to do a track and after they recorded their verses I didn't really touch it. There's still a couple of verses that need to be recorded for some songs, and some things that need to be touched up and fudged with a little bit. What I wanted to do with the third album was have guest spots because, with the exception of a few tracks of the second album, it's all me. I wanted to make a more formal hip-hop album where there's guest stars. I don't even know if the third album will come out, because I'm now interested in doing something that's less hip-hop and more straight and dancy at this point.

You don't want to wrap up the third album if you're not feeling inspired about it.

Yeah, and that's the way in which I operate in general. This is why the Catholic Guilt album took so long for me to mix. I wasn't going to try and rush it if I'm not in the headspace to feel it. The first Escalade album took a long time. With the song Drunkstep, I was drunk during every part of the recording. That was part of the idea. Each song is a different character. I feel like when I write, every song is like a shade of a character, so I have to be in character to do it. If I can't get into character then I can't do it, and don't want to do it.

You would rather transform than put on the mask?

It's like a mask but at the same time it's about cutting the bullshit. If there's something crude or disrespectful happening at a show most of the time I won't say anything. But if I'm playing at an Escalade show I'll probably call you out and make fun of you, and go out of my way to do it. I lose a lot of my social niceties when I'm playing at a show. I think it's a good thing. Not always, but occasionally you have to cut the shit. Sometimes I feel like Escalade is just part of my true self, not some sort of act.

You've mentioned a change of direction. What direction are you looking to go from what people have seen or heard thus far?

I've committed myself to the idea of not doing as many rap tracks and doing more straight ahead dance and pop music. Now, all of a sudden, I'm starting to come up with rap lyrics again. For a second I felt that I wasn't coming up with anything good, so I wasn't going to try to write raps. Now, the second I decide not to do it, shit's just coming out. I would like something more improvised, because I just get incredibly bored singing over stuff. It's great because Lexis has the DJ thing happening on the computer, so there's an element of improvisation there. Having Lexis there means tons of adlib, and there's adlib between songs. But I just want something at the core of it all to be more improvised. That's what I'm trying to do. Right now it's just a rough idea. I have close to a thousand embryotic forms of songs. Most of my songs are based around some sixteen bar loop of some variety or an eight bar loop and I have close to maybe a thousand of them. I make at least one everyday. Any one of them could be developed at any point. Sometimes I'll make something and won't be able to mess with it until a year after the fact.

You've mentioned new member Lexis. Why was he brought in?

Lexis knows the words to my songs better than I do. I don't like being up there by myself, although I can do it. He's been my hype man, my DJ and picks up the slack. I don't think he started doing this regularly with me until the beginning of this year. Hopefully, sometime, I want to book a Megabus tour for us. If I book it all far enough in advance, transportation will just be next to nothing and we could play all the cities Megabus goes to. Just have people pick us up, because all we have is a laptop and some microphones. All we'd need to bring is some clothes. I was also thinking sometime it would be cool to do a tour on the West coast, just riding my bike and backpacking. I've always wanted to ride my bike up and down the West coast. It'd be funny because I'd have to book every show two or three days apart. I'd be in damn good shape.