KDHX's Super Fun Happy Hour was a long-running punk-centric radio show hosted by locals Tim Mize and Matt Meyers. In its fourteen years on the air, SFHH remained consistently entertaining and relevant, mixing local releases in with punk classics and rarities alike and oftentimes allowing for local punk bands to perform live on the air from within the studio. On February 28, 2011 the boys put the show to rest, citing the taxing nature of late-night radio and their desire to focus on their lives outside the studio as their reasoning. Senior RFT Music writer and KDHX programmer Roy Kasten conducted this interview with them upon their departure, which seemed to indicate that the hiatus was only to be temporary. "People like me and Matt, we can't sit still for too long," said Mize. "We need to be doing something. So we're just taking a break."

Last Saturday, August 18, Tim Mize suffered a massive stroke and passed away at the age of 45. According to family it was very swift and he did not suffer. Mize was an organ donor, whose kidneys, lungs and liver have already found new homes -- heroism in death should never go unnoticed. A memorial service is being planned; details can be found on this Tim Mize Memorial Facebook page.

In addition to the Super Fun Happy Hour, Mize contributed to the worldwide cause of punk rock in another way: In the late '80s, he fronted the much-loved local hardcore band Laffinstock. Click through for a download link to their demo. Also located below are downloadable KDHX live recordings of eight more St. Louis punk bands: Civic Progress, Sayonara, Dancing Feet March to War, Corbeta Corbata, Dumbledore's Army, God Fodder, The Beating, and Cardiac Arrest. All were recorded for Super Fun Happy Hour and all but the last on the list are no longer active. 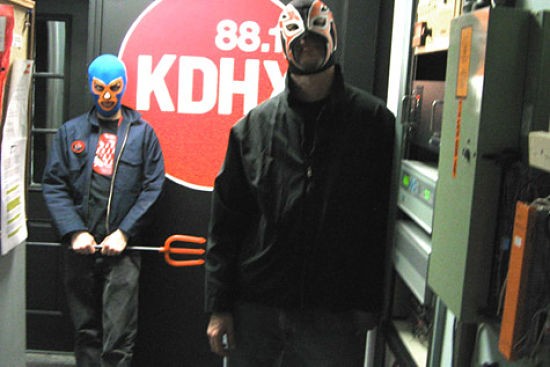 Gateway to the West Fest Returns - The Full Lineup is Here

Joe Stumble of the now-bygone blog Last Days of Man on Earth (click that link for Laffinstock information, then browse around for the tons of other great old scene shit there) had this to say about the band:

What was great about Laffinstock was that they took everything that made St Louis unique during the [first] hardcore era (which lasted longer here than in most places) and wrapped it up into one big powerhouse of a band. They took the heaviness of Drunks and combined it with the speed of White Suburban Youth and added the humour of Ultraman....They were the last great hardcore band for me. The fact that they were local was irrelevant.

Speaking personally for a brief moment, I had the pleasure of playing a live set for SFHH in my own band, on June 6, 2006 (or 6/6/06, as fans of satanism will remember). I didn't include that recording, for the sake of journalistic integrity or something (probably also related to the fact that I'm not sure where my copy is and I'm far too lazy to look). Tim and Matt were endlessly hospitable, hopelessly nice guys the whole time, and even stuck around with us after their show was done, drinking beer and shooting the shit for another two hours -- which put departure time around 4 a.m. I mourned the loss of the radio show when it went down, and now I join his friends and family in mourning Tim's death. Hell of a great guy; tonight's round of pre-bedtime drinks goes out to you, man.

All sets live on KDHX: