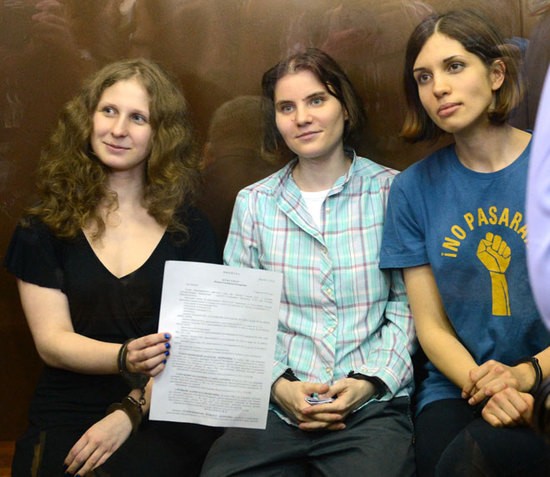 If there's one thing the Pussy Riot trial has taught us, it's that protest music can still be a dangerous, subversive tool. By performing an anti-Putin "punk prayer" during a guerrilla action at a Russian Orthodox church, Pussy Riot intended to provoke and offend. Many saw their action as blasphemous, and it's not surprising that ordinary Russians disapproved. But whereas such a stunt would have earned them, at worst, a fine or a light sentence in most Western countries, the three Rioters are about to spend two years in a Russian prison, essentially for protesting Putin and his policies.

Here in the United States, it's been some time since rock and roll, hip-hop, or any other form of popular music shook society's pillars. Even when certain musicians have attracted government heat, they've benefited from a Constitutionally derived and strongly-defended free speech tradition. The Weavers spent a few years on a government blacklist in the 1950s; John Lennon battled the Nixon administration to procure American citizenship; and Ice-T found his band, Body Count, dropped from its record label and chastised by Charlton Heston post-"Cop Killer." Yet despite the great personal and career damage each of them experienced, there was never any real question that they'd end up doing hard time for their statements. Hundreds of artists and punk rockers protested Ronald Reagan in the 1980s and the Iraq and Afghanistan wars during the George W. Bush era; almost all continued to create without fear. Meanwhile, in Russia, even chess legend Garry Kasparov found himself allegedly arrested and beaten while demonstrating against the Pussy Riot verdict. It's a scary, surreal thing to behold.

But Pussy Riot is hardly the first group of young people to be branded as dissidents by its homeland government. As their story continues to evolve, here are four other musicians that fell afoul of their respective regimes. Inevitably, all of them ended up being celebrated worldwide.

1) Plastic People of the Universe. In 1968, inspired by Frank Zappa, the Velvet Underground and a temporary period of liberalization, this Czechoslovakian band formed and began playing around Prague and elsewhere. After drawing on the work of Czech writer Egon Bondy for inspiration (even titling an album Egon Bondy's Happy Hearts Club Banned), the Plastics and their fans found themselves harassed by the Communist government. The band went underground: lyric books were surreptitiously and selectively passed around, and their concerts were billed as "weddings" to take an advantage of a loophole in Czech law. In 1976, however, several band members were tried and arrested for "organized disturbance of the peace." In protest, some of their biggest fans, including Vaclav Havel, wrote the Charter 77 initiative, and eventually ended up running the country.

Plastic People of the Universe playing a "wedding party."

2) Gilberto Gil and Caetano Veloso. In the late 1960s, the Brazilian tropicalia sound merged traditional bossanova and samba with Jimi Hendrix, Jefferson Airplane, and the psychedelic Beatles of Sgt. Pepper and Magical Mystery Tour. Today, tropicalistas such as Os Mutantes, Gilberto Gil and Caetano Valoso are considered among the era's most innovative artists, In 1968 Brazil, though, playing anything that could be branded "rock and roll" was enough to make you a genuine governmental threat. In December of that year, Veloso performed a satirical version of the Brazilian national anthem on national television. Gil and Veloso were arrested shortly afterward; they spent three months in prison and four months under house arrest before ultimately being deported. Gil ultimately returned to Brazil in 2003 as the Minister of Culture. Like Plastic People's fans, the very people ostracized by their government ultimately had a role in running the country.

Gilberto Gil with Os Mutantes, "Domingo no Parque," 1967 3) Fela Kuti. Singer, saxophonist, leader of the Africa '70 band, pioneer of the Afrobeat sound, nightclub owner, polygamist, and founder of the Kalakuta Republic commune/studio, Fela Anikulapo-Kuti was essentially the Nigerian Bob Marley. He released dozens of albums, many containing only one or two songs lasting half an hour. His concerts were legendary marathons, often going literally to the break of dawn. Paul McCartney and James Brown paid their respects when in Nigeria. Cream drummer Ginger Baker was a member of his band. Throughout the 1970s, his music became more political, much to the chagrin of the Nigerian government. The last straw was 1977's "Zombie," a frantically-paced, bitterly mocking indictment of the Nigerian army. (You can hear him audibly laughing as he imitates a drill sergeant.) This led to one thousand soldiers at the Kalakuta Republic's doorstep who set the house and studio on fire; in the confusion, Fela's mother was fatally thrown out of a window. He responded with two songs, "Unknown Soldier" and the mournful "Coffin for Head of State." He continued to generally be a thorn in his government's side until his 1993 death, even attempting to run for office at one point. Two decades later, Fela is the subject of a Broadway musical, and two of his sons continue to tour and spread Afrobeat worldwide.

4) Aquarium. Trying to create music under Communist rule was, to put it mildly, a pain in the ass. Rock music pre-glasnost was heavily regulated. The Soviet Union had one state-run label, Melodiya, that was just about as regimented as you'd expect. Forget DIY; deviate from the official program and you risked being branded a dissident, even if your music wasn't explicitly political. Some Western rock music passed under the official channels, but was officially banned. This was the atmosphere in which Boris Grebenshikov, a Dylan-obsessed singer-songwriter, faced when he formed Aquarium. Like Plastic People, concerts were generally private and conducted in virtual secrecy so as not to draw official attention. Through virtual word of mouth, however, Aquarium became one of the most popular bands in the U.S.S.R. In 1986, the U.S. Indie label Big Time Records released Red Wave, a double-album compilation including several Aquarium tracks. Grebenshikov later went solo.

Aquarium live in 1980 at a rare concert hall setting.