Best of the Mumford and Sons Gentlemen of the Road Stopover: The Top Hat Awards

See also: How it happened Mumford & Sons in Dixon, 8/18/12: Review, Photos and Setlist The Mumford & Sons-themed Decorations in the Store Fronts of Dixon, Illinois: Photos

Best Sing-Along: The Very Best ft. half the day's bands covering "Will You Be There" (a.k.a. the Free Willy song) The Very Best probably didn't come in expecting to be demanded to play an encore, and it definitely didn't expect to get cheered back for a second one. Radioclit queued up "Will You Be There," and the band asked to have the lights turned down on stage. By that point half of the rest of the festival's lineup was standing on stage, smiling, sweating and, in several cases, shirtless. 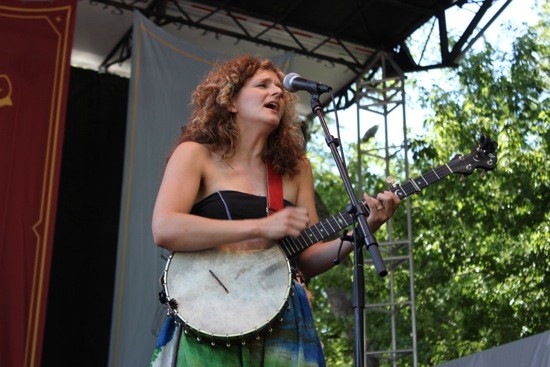 Best Communist: Abigail Washburn Abigail Washburn makes the ugliest duckling known to instruments - the banjo - sound like some kind of perfect nature song, and her voice has the warmth of a lullaby, never more than on the song she sang in pitch-perfect Mandarin Chinese.

Best Chicken Tenders (in the World): BBY's Dixon's most gaudy downtown restaurant is also the purveyor of some amazing chicken tenders. Juicy, served piping hot with a thin coating of batter.

Best Overpriced Souvenir: Afghan Behind the various Stopover t-shirts, the most popular merch item was a woven black-and-white blanket, roughly five feet by four feet, with the Gentlemen of the Road logo in the center. Asking price: $45

Best Security Guard: The Protector of the Page Park Entrance (Campground Side) The Mumford & Sons crowd does not offer the greatest security challenge in rock & roll history. That didn't stop one block of muscle guarding the Page Park entrance on the campground side from treating his turf like a demilitarized zone. Pockets were emptied, camera was questioned, junk was groped.

Best Socially Unacceptable Behavior: Gogol Bordello's Eugene Hütz Holy shit was this crowd not ready for Gogol Bordello. That wouldn't have been a problem, really, except that the band played immediately before Mumford & Sons on the same stage. So there were people who drove hundreds of miles, stood outside the gates for hours and camped out in front of the main stage all day so they could be as close as possible to their favorite band. And right there at the finish line was this crazy gypsy carnival, yelling about freedom and standing on the monitors. So how did front man/human whirlwind Eugene Hütz respond? By showering the first several rows with bottles of wine, obviously. Start wearing purple.

Best Drumming: Haim Finale Haim was our surprise of the day. If you've heard the cursory details of the band (sisters from Los Angeles, folk ties, family band past, fashion buzz), you are being sorely misinformed. The three (and drummer Dash Hutton) put on a muscular rock & roll show. The Haims prowled the stage, trading vocal leads and leaning heavy on beats. The early recordings suggest much more polish than the live set had, and we mean that as a compliment to the show. The band ended with all three sisters at the edge of the stage wailing on various drums.

Best Facial Expression: Taylor Goldsmith In spite of the above solid entrant from Marcus Mumford, the prize goes to Dawes front man Taylor Goldsmith, who ran the gamut from looking sort of constipated to Springsteen-ian jaw jutting. As long as he keeps singing such awesome songs, we're in favor of whatever he wants to do.

Best Voice: Nathaniel Rateliff Also a winner in the category of Best Constantly Looking Catastrophically Hung Over, Nathaniel Rateliff can push a truly insane amount of air from his lungs. And his power comes with control, so that in the course of a single verse he can go from a bell-clear whisper to a bellow you could hear clearly even if separated from the stage by a solid chunk of forest.

The (Very) Best: The Very Best

If the Very Best's set was not the best show I have ever seen it was definitely the most fun.