I'm willing to be surprised, on this, but if word got out that there was a Beck sheet music album coming out, I'm fairly sure the average RFT Music reader could fill in the rest of the news story him-or-herself. So: There's a Beck sheet music album coming out. It's called Song Reader, which is nicely dual-meaningful. It's coming from the publishers you'd expect to be producing a one-off, meticulously detailed, pleasantly dated print artifact -- McSweeney's -- and is being presented as some kind of defense of the album format and so on.

You might be a little surprised, though, to learn that it's apparently the only way these songs will be released, which puts this somewhere high on the list of the most awkward music delivery systems in recent memory. Join me on a journey through awkward-music-delivery history, beginning around 50 years after when Beck's album looks like it was released and ending with its actual release this December. 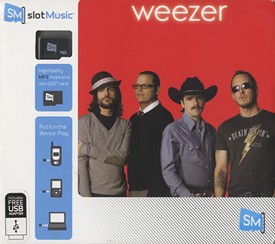 5. SlotMusic. I'm going to be honest: Of all these ridiculous music formats, I've come closest to buying into SlotMusic. By 2008 I was both buying most of my music digitally and regretting the end of being able to judge people based on the contents of their teetering Laserline CD Tower. SlotMusic seemed like a reasonable compromise: A microSD card with a preloaded album and a set of liner notes that fit into your existing teetering-CD-case.

Eventually cooler heads prevailed: I became less into judging people for their taste in music and realized that I didn't really want a physical reminder of every album I bought, just the ones from my favorite bands or the ones that marked a time of my life the most clearly. So I bought Weezer on CD, and by the time Raditude came out SlotMusic was, like Rivers Cuomo's cowboy-hat-and-mustache phase, already a weird anachronism. (Plus I couldn't get the deluxe version of the Red Album on SD card, anyway, and it kind of sucks without "Pig" and "Miss Sweeney.")

4. Cassettes in 2012. I should know better, but I don't. Back when I actually had to buy cassettes, because I didn't own a CD player, I knew full well how terrible they were: You couldn't skip tracks, everything sounded like someone was playing it for you over the phone, and as romantic as mix-tapes supposedly were my significant others apparently all liked hearing the first two or three seconds of every song.

CDs get dumped on now, because they're unnecessary, but I think that's only because most of us have forgotten the first moment they were able to upgrade from cassettes, which are awful. Now, though, like every 20-to-30-year-old on earth, I'm buying cassettes again, like an idiot. Which is not to say that I regret my 99-cent Wings at the Speed of Sound purchase, exactly--only that the whole enterprise reeks a little of Marie Antoinette building an enormous peasant-village-theme-park on the Versailles lawns.

Where I draw the line: the current issue of The Believer, which has a cassette affixed to its cover.

Buying up the world's supply of Out of the Blue cassettes feels, to me, like a harmless affectation, if not one I would tell my psychologist about. Making new cassettes, so that people who once swore they'd never again deal with their off-brand Walkman's hissing, tape-eating caprice can pretend they're in a movie called Terrible Fidelity -- that's too much. 3. Super Audio CD. You might have seen one of these if you have a friend who buys Monster cables and worries about room acoustics and has a special Playstation for playing CDs. If you don't have one of those friends, try not to get one.

2. HitClips. Next time someone you know makes a where-are-the-flying-cars complaint, remind him that in 1999 the primary music delivery mechanism for nine-year-olds was HitClips, little memory cards that gave you about a minute of your favorite Smash Mouth song in sub-ringtone quality. (If you value your audiophile friend, do not let him listen to a HitClip.)

Now nine-year-olds have iPod Touches, which are faster (and higher resolution) than the computer you were using Napster on in 1999. Also, they don't know who Smash Mouth is. HitClips were really 1999's best advertisement for cassette players -- though, in their defense, they're probably too difficult to reproduce to ever be affixed to an issue of The Believer.

1. Sheet music. Album-rock nostalgia is bad enough when it leads solemn-faced critics to declare the Death of Music every time somebody buys the three good songs from a Foo Fighters album instead of listening to the record in sequence. When it leads to press-release-sentences like this one:

Song Reader is an experiment in what an album can be at the end of 2012 -- an alternative that enlists the listener in the tone of every track, and that's as visually absorbing as a dozen gatefold LPs put together.

It's positively unbearable. Don't get me wrong: I love the project itself. The set is bound to be beautifully designed and great to look at, like everything else McSweeney's puts out, and it's a fascinating art project that's going to produce a million YouTube videos. But this has about as much to do with what an album can be ~ at the end of 2012 ~ as that HitClips commercial.

If there's a future for the album as an indivisible unit of music measurement, it's on Bandcamp, not inside a piano bench; I can't begrudge anybody their round-the-piano nostalgia or their attempt to get people to pay for music, but when the release-date buzz settles I'll probably just wish I was listening to Beck.