Gateway to the West Fest Returns - The Full Lineup is Here 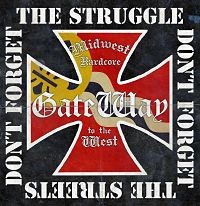 Gateway to the West Fest is a St. Louis festival of hardcore punk music that first took place seven years ago at South City's American Czech Center when local hardcore promoter Adam "The Devastator" Greer pooled his contacts from his years of booking shows and brought St. Louis the likes of Outbreak, Blood In Blood Out, Blacklisted, This is Hell and a slew of others. In the six months that followed, Greer tirelessly booked two more fests carrying the name, bringing Modern Life is War, Risky Business, the Amniotics, Cast Aside, Down to Nothing and Nervous Wreck to town and making the summer of 2005 quite a memorable one for St. Louis hardcore fans.

In 2011, after a six year absence, Greer once again brought Gateway to the West Fest to St. Louis. Working in tandem with local tattoo artist / hardcore scene veteran Donna Klein, this incarnation of the fest brought to town No Class, The Killer, Agress, Bent Life, Hardside and about twenty others, and its return was named by RFT Music as one of the biggest music news stories of the year. This year, Klein has taken the torch and blasted off the line with it, booking one of the most impressive line-ups yet and helping to prove that hardcore is alive and well in the city of St. Louis. "This year's line-up is beyond amazing for us," says Klein. "There's a lot of hard work and effort being put into it. If you like hardcore, and you live in the Midwest, you should probably be at this."

Gateway to the West Fest 2011 - No Class, Another Mistake, Hardside, Big Mouth

The dates for this year's fest will be October 19 and 20 at Fubar. Tickets cover both days and are $35 -- they will go on sale August 20 through Fubar's website. Follow this Facebook event page for updates. The complete line-up with links to each individual band is listed below, in no particular order.

Out of Time - Saint Louis, MO

Only the Brave - Springfield, MO