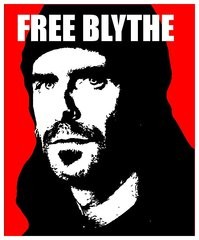 Randy Blythe is free! The Lamb of God front man has been held in Czech prison on manslaughter charges for the past five weeks. He was allowed to leave after posting a $400,000 bail, which the prosecutors asked the judge to deny for fear Blythe would never return to the country.

As of last week, the judge was doing just that, but Blythe is out now. He still faces charges over a 2010 incident involving a fan's death at a Lamb of God show -- the prosecution claims Blythe threw him off the stage onto his head. Blythe says he doesn't remember the details of the show, but is sure he didn't maliciously attack anyone.

Lamb of God was supposed to make an appearance in St. Louis with Dethklok and Gojira at the Family Arena, but last week that tour was put on hold. The band is now planning to play Knotfest on August 17 and 18 and plans to start a U.S. tour at the end of October. We'll let you know when/if a St. Louis date is announced.