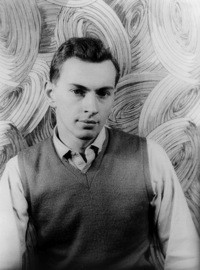 Gore Vidal was one of the world's strongest voices and greatest writers. He died last night at the age of 86 of complications from pneumonia.

Vidal had his most famous clash with establishment ideas when he published The City and the Pillar, which featured homosexuality in 1948, making it one of the first major American novels to do so. He was a playwright, a critic, journalist and even ran for office. He will be greatly missed.

The world today may be friendlier to LGBT ideas, but it is still way more fucked up than Vidal might have hoped when he published his first book in 1946. In honor of his legacy, we must never stop asking questions. Famously, Vidal said, "The corporate grip on opinion in the United States is one of the wonders of the Western world. No first world country has ever managed to eliminate so entirely from its media all objectivity -- much less dissent."

To help you sort out your feelings, we suggest the perpetual weirdness of locals Skarekrauradio, who paid some kind of tribute to the author on a 2006 split with Columbia's Jerusalem and the Starbaskets on Apop Records (Apop 012, to be exact). The band likely would have disagreed with several specific tenants of Vidal's political viewpoint, namely his fiscal conservatism, but we have no doubt that they have a kindred disdain for complacency. Listen to "Lord of Gore Vidal" below.

Note: The only stream available online is through MySpace, so you're going to have to click that uninviting looking button to hear the track. Lord of Gore Vidal

"Lord of Gore Vidal" is, in keeping with that era's iteration of the band, relatively melodic for the first minute or so. Though there's still plenty of discord by way of the shouted vocals, and the final three-fourths of the song are a squirrelly mess of guitar.