Exclusive: Listen to a the Lead Track From Boss Hall's New CD, In the Pale 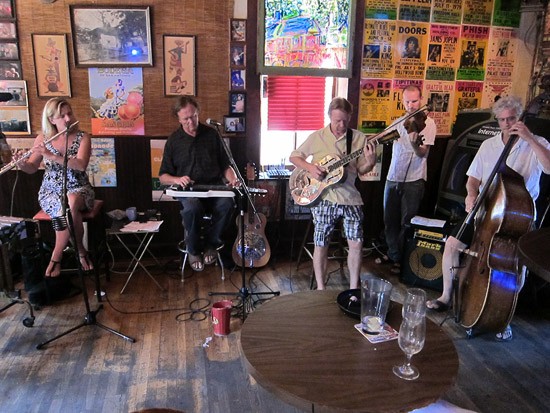 In this week's print edition, we spotlighted the band Boss Hall and its debut CD In the Pale. The group features five of the most prolific performers in St. Louis: Margaret Bianchetta, Tom Hall, Bob Breidenbach, Vince Corkery and Kevin Buckley. Along with its weekly Sunday afternoon shows at the Shanti, you can catch Boss Hall at Joe's Cafe (6014 Kingsbury) on Wednesday, August 2 at 8 p.m.

Listen to the leadoff track "Crossroads," and read songwriter Bianchetta's take on the origin of the song below.

"Apparently I'm always in a relationship but it's always not a good idea," Bianchetta says. "To solve that problem I soothed myself by writing a song about it. I wrote it in 1996 or so. I'm a fixer upper person, but that will never work. So I'll just wait for you to fix yourself up.

"At the time I was trying to get an all-girl group going, with Mary Dee Brown, Sharon Foehner and Martha Grice. Sharon was so deeply rooted in the blues. I was forcing all these songs on her, "My Funny Valentine," you know, and she did a good job with them. So I tried to write a song for her, meet her on her ground. It was a challenge to me to write a song with three chords, interlude, no bridge. I just happened to have a horrible, bluesy relationship happening, so I wrote about it."