Last weekend, during a road-trip to the Northern-er portions of our country, one of my travelling companions (one Ben Osborne) got his hands on the vehicle's stereo and hooked up his MP3 player, hijacking the entire audio entertainment of an eight-man-deep van. It may have been in direct response to the weekend's ubiquitous drunken a capella sing-a-longs of Doug Mulray's hilarious single "I'm A Punk," which had permeated nearly every aspect of our trip -- especially the ten-hour drives (chorus: "I take druuuuugs and get drunk! I take druuuuugs and get drunk! I'm a Punk!").

Ben, who neither takes drugs nor gets drunk (punk status would be in question, by Mulray's standards) was most likely less amused by this incessant off-key drunken yelling than it's pure-punk perpetrators were and took action. Shortly after he pressed play, the music coming out of the speakers struck me as familiar, though I did not know the songs specifically. Ben went on to explain that what we were hearing was some unreleased material he had recorded for St. Louis' bygone hyper-fast no-frills punk band Sweet Tooth.

My excitement could barely be contained, as Sweet Tooth was one of my favorite bands in town and their untimely end late last year had been a major bum-out, but the existence of new / found material served suddenly to soften that blow. I asked Ben to get in touch with the guys in the band to see about posting the songs online for one of these RFT blogs; they gave the go-ahead and now here we are. Thanks guys! Click through for a download link for the new material, as well as video of the band's final show and downloadable early demo. 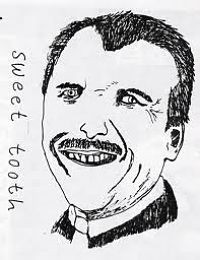 See Also: There is an Epic Outdoor Generator Show Impending, The Likes of Which We Allegedly Aren't Supposed to Tell You

The download link for the new EP is on the next page, along with video of the band's final show. In March of last year, fellow RFT Music writer Josh Levi had this to say about the then up-and-coming band:

From the east side of things hails Belleville/St. Louis cronies Sweet Tooth, which has made a name for itself as one of the newer and more exciting bands to rise from the heap. These kids take a lesson from the school of legendary hardcore vanguards Deep Wound, Void and early '00s thrash from the likes of such bands as What Happens Next. Its first demo, Sugar Rush, is an examination of teenhood and suburban angst, delivered by powder-keg bursts of angry vocals and lightning-fast drums. With songs clocking in at under two minutes, Sweet Tooth's furious brand of stop-start hardcore explodes with screamed lyrics that cover everything from skating to the corruption of youth. The band's chaotic style is marked by extremely fast tempos, a love for traditional hardcore breakdowns and heavy mosh parts. Live, singer Kevin Tod commands the floor, thrashing about in a surge of rabid mania backed by bassist Landon Zirkelbach, and brothers Erik and Martin Meyer. Sweet Tooth has just released its Japanese Void seven-inch on Cowabunga Records, and it already has plans for another seven-inch in the near future. Like any good band, Sweet Tooth has a handful of tours under its belt, with an East Coast jaunt planned for the 2011 summer. Serving as inspiration to anyone doubting hardcore, this youthful quartet remains fun and enthusiastic in a community stifled with jaded has-beens and bottom-of-the-bottle burnouts.

The Japanese Void EP, mentioned in that write-up, we later dubbed as one of the best releases of 2011, even as we lamented the dissolution of the band. It is not available here for download, but you can check Cowabunga Records to order one. In the meantime, the download link for the unreleased material is HERE (no titles or info; deal with it).

Below is the full video of their final show: fifteen minutes of complete chaos, culminating in the absolute destruction of a drum set with a sledgehammer.