First Punch Film Productions has been busy rolling tape the last few months (well, rolling digital data). The local film company releases two new videos tonight: one from local band Née and the other for Colombian rap group, Los Calvos. Filmed simultaneously in different parts of the world, the videos take radically contrasting approaches to the notion of music videos. The party kicks off at 9 p.m. at Nebula Coworking (3407 S. Jefferson Ave) with the first movie screening at 9:30.

Née's recent single release "Pretty Girls" translates into a video as a tribute to classic pop videos complete with choreographed dance and a wardrobe changing scene. "Pop videos do that [choreographed dance] and it's so produced and so slick. It's really funny but nobody ever has any humor in it," says Kristin Dennis, lead singer of the band. The video is mostly Dennis' brain child. She came to First Punch with the idea and they were able to make her vision a reality.

Update: After a triumphant debut for both videos, you can now view them right here from the comfort of your computer. The Los Calvos video is on this page and the Née clip is on page two.

Much of the video making process seems like a DIY project, however the final product is nothing less that professional. Dennis handmade costumes before shooting and every tiny piece of confetti was hand cut. The band even carried its furniture and gear from one Cherokee street space to the other.

Nee's video gave First Punch the opportunity to really tap into studio's capabilities and make full use of their cyc (cycolorama) wall. "We brought out all of our fancy lights and the dolly and showcased the cyc wall. And these aren't things we get to do every day so it was a great opportunity technically for us to showcase a lot of the stuff we have in house," says Carson Minow, Managing Director of First Punch Productions. 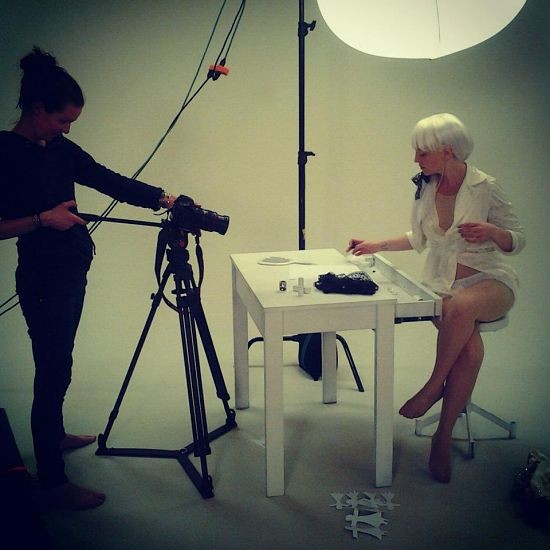 A cyc wall is an all white shooting space with a concave intersection between the floor and walls, as opposed to the standard 90 degree angle. "It's built to be curved so it's an infinite space and goes on forever," says Sam Coffey, one the many First Punch crew. The video helps showcase the wall as an available amenity within the studio. "We can do the same thing that giant studio can do. Just by figuring out the right lenses to use and lighting it right," says Coffey.

First Punch also demonstrated their aptitude for animation. Ryan Frank added bits of hand drawn, frame by frame animation to subtly emphasis certain scenes. "It's one thing to do a video and it looks great. It's another thing to add animation and take it to a whole other level of professionalism. Because really, who has animation?," says Dennis.

Ryan Frank was also the producer and director of the Los Calvos' "Mundo en Guerra" video shoot in Bogotá, Colombia and also making its debut tonight. The video aims to expose life in the Bogotá barrios while accompanying music with the same message. "Their songs are all about violence and gang warfare because that's the world they live in. But they have a really positive aim," says Frank. "They are trying to life up the kids and they do a lot of community stuff to try to get them away from the drugs and crime and get them more into something like hip-hop."

As a survey to Los Calvos' culture (the group's name means "the bald" in Spanish), the video has scenes of the market place, cock fighting, police arrests, break dancing, and micro-futbal, a Colombian form of soccer with smaller balls and goals used to emphasize footwork. Frank had immense community support while shooting the video. Motorcyclist waited to dump full SD cards for him back at their production space while he stayed on set. People also set up the next scene for him before he finished filming the previous. "I realized how easy it is to make something when you have an entire community to support it," says Frank, who wishes to return and film again on a bigger scale.

He collaborated with a group called Urban Visional. The small Colombian film company is made up of two early twenty-somethings who made all previous Los Calvos' videos and had back up cameras waiting when needed.

Ryan was able to set up the video through a friend originally from Bogotá who served as a translator for him. He went to Colombia having already made arrangements with the musicians and set out from there.

This is not the first time Ryan has done a project like this. In 2008, he did a another video for Ghana rapper Jakpata's song "Tsogbede." The first time Frank went to Africa without having anything lined up and did his research from there. His second adventure with Los Calvos' video was a more organized affair. "It's a great way to get to know a culture, I think," says Frank on why he enjoys making foreign rap videos. "And I come home with a product, not just vacation photos. I have something I can put on my reel."