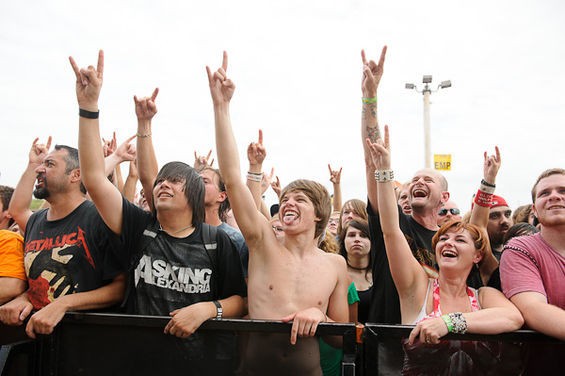 The rock fist is a tradition as old as time -- or at least as old as the fifteenth century, when it was used to measure the distance between positions on the tenor trombone and also to ward off bad luck. At least according to Wikipedia, but Wikipedia also veers off pretty quickly into ball-grabbing and later asserts that it was used in Chicago and Cleveland during the '50s and '60s to mean "bullshit" [citation needed], to which we say, "Bullshit."

Regardless, it definitely means, "Thank you sir, may I have another" when you are at a rock and roll show, which the attendees of Mayhem Festival last weekend at the Verizon Wireless Divot were. Photographer Todd Owyoung was there to capture the many shades of rock fist, and we present to you this handy guide to the symbol's etiquette. Though I don't know why you'd follow our advice. That's not very rock and roll.

Do: Full extension. None of this bent at the elbow garbage. However, on the right hand side there, you see our first and biggest don't. 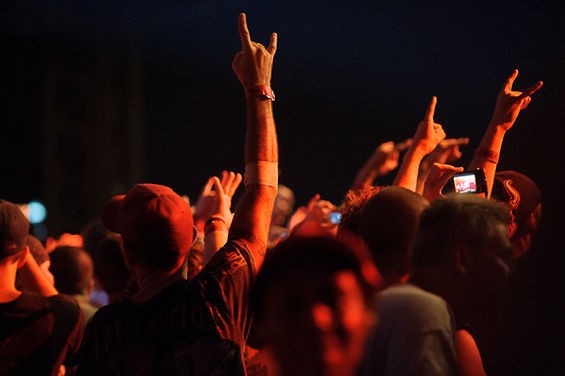 Don't: Cell fist. Come on, people. We've been over this -- mind your fucking iPhones.

Do: Capture the spirit. OK, so it's not a proper rock fist -- more like a rock point or maybe a rock pistol. But As I Lay Dying front man Tim Lambesis is behaving appropriately for someone standing in the exact spot Lemmy will be in a couple hours.

Don't: Limp fist. Even if you're jumping. You keep them horns pointed skyward or you put that thing down.

Don't: Be Slipknot. You taking measurements there?