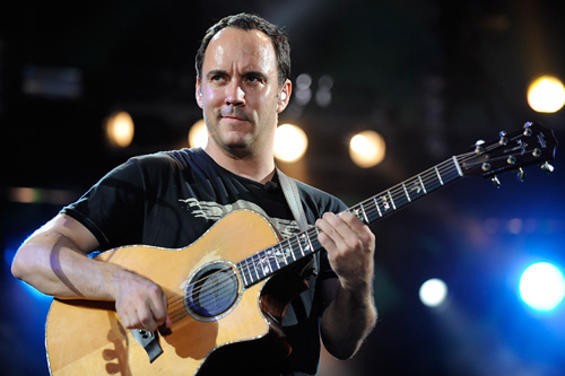 Dave Matthews has exceeded the usual confines of a musician. He is an idea, a cultural shorthand, a punchline, a hero. No less a songwriter than Brandi Carlile (much more on her in next week's print edition), who opened for his band last night at the Verizon Wireless Amphitheater, described him on stage as "magical," as in, "the magical Dave Matthews will join me" before the two played John Prine's "Angel From Montgomery." No less a curmudgeon than Robert Christgau, reviewing DMB's studio debut in 1994, felt slightly different: "Like his homeboy and forebear Bruce Hornsby, Matthews jams politely. His instrumentation invokes classical, jazz, and bluegrass niceties...he's as bland as a tofu sandwich."

But to the hippie-ish girl on the lawn dancing steadily to all nine minutes of a fiddle solo by Boyd Tinsley and right through the next four minutes worth of guitar solo by Tim Reynolds (though even she had no sway for the ensuing drum solo), neither opinion much matters. You're not really supposed to pontificate about Dave Matthews Band (I know, I know); you're supposed to ride the wave.

It's been two years since the group last came to St. Louis -- an uncharacteristic break for a band that has a relentless touring schedule partially to thank for its devout fan base -- and there were thousands eager to hop back on the ride. There were middle-aged couples who drove from Jefferson City for their "20 or 30th" DMB show and West County prom royalty making out against the fence at the top of the lawn and, yes, a preposterously homogenous collection of white people (though in fairness I doubt the racial ratios were much different at Beach House).

Whether you agree with Christgau about the bland part, it's hard to argue with the niceties part -- this is unobtrusive music. For two and a half hours, Dave Matthews Band locked into a neat little groove ranging from 105 beats per minutes all the way to, say, 110 beats per minute. And yes, of course this is an exceptionally competent band: Reynolds, Tinsley, drummer Carter Beaufod, bassist Stefan Lessard and the horn section missed a vanishingly small number of the thousands upon thousands of notes they played.

As for Mr. Matthews, it's not hard to understand what Carlile was referring to. He has an ease and charisma your most cynical friend would be hard pressed to deny, and he directs this colossal proceeding with unbelievable congeniality. If you're going to put get tens of thousands of people to go to the considerable effort of jockeying with one another for a day to get themselves arrayed around you, and if you're going to do that once a year for twenty some years and all the while release only seven studio albums, there will be certain expectations: You must simultaneously make every show feel unique while delivering assembly line consistency. And there are few front men anywhere who can accomplish that with as much grace as Dave Matthews. He sings in that unmistakable mewl and speaks low and agreeably. He pours sweat and furrowed brow into the whole marathon of a set and leaves smiling.

And oh this crowd. I don't think I've ever before been to a show where the fans were updating the setlist online live with meticulous attention to detail. Even way out in the rarefied air of the lawn, every expansive, noodling music diversion left visible bliss on every face. Embrace the machine, accept the machine or have a feel-good conversation about changing the machine. But whatever you do, don't rage.

Notes, setlist and a fan video of main set closer "Ants Marching" are on the next page. Critic's Notebook

Personal Bias: Some of my best friends used to be big Dave Matthews fans.

Overheard: "When I was in high school, I knew everyone here."

Random Detail: I talked to someone who has worked security at the Amphitheater for a long time -- she assured me that Dave Matthews is as nice -- nicer -- than you'd think. She also says his band is in very, very select company for playing such long sets with no intermission.