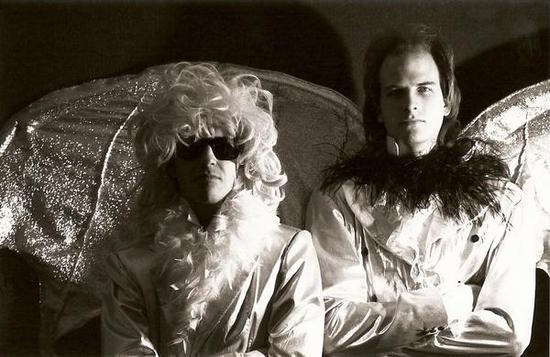 Sad news out of Wisconsin: Dennis Flemion, one half of the Milwaukee-based sibling duo the Frogs, disappeared over the weekend during a weekend family boating trip, and is currently presumed drowned. Of the growing population of rock & roll heaven, surely Flemion is one of the few members already equipped with his own wings, whether he needs them now or not.

It's safe to say that there has never been another band like the Frogs. Starting in 1980, Dennis and brother Jimmy Flemion recorded literally hundreds of cassettes containing ad-libbed "Made-Up Songs." These, more often than not, were extremely scatological and riotously funny. Sounding eerily like an even more debauched Ziggy Stardust-era Bowie, the Frogs couched these outrageous lyrics in pillows of acoustic guitar and fey vocals. Toward the end of the decade, the Flemions broke out of the cassette underground with a 1988 self-titled LP, but it was the next year's It's Only Right and Natural that really became the Frogs' statement. It was a song cycle mostly celebrating homosexuality at a time when that still made people nervous. Or wait: were the Flemions making fun of homosexuals? They sure weren't going to tell. At their concerts, they dressed in silver lame costumes complete with bat wings, and performed these songs in an absolutely deadpan manner. In this way, they made both the hipsters and the squares uncomfortable (while unconsciously anticipating the likes of Flight of The Conchords, who mined a similar absurdist approach with completely different subject matter).

Whether through outrageousness or sheer persistence, the Frogs eventually developed a Zelig-like ability to shadow the 1990s mainstream. In the post-Nevermind world, Jimmy and Dennis Flemion found themselves feted by some of the most famous names in the business, yet remained too resolutely offensive and plain weird to do much cashing in themselves. Yet, even after their profile faded, they never stopped creating. Last week, coincidentally enough, they released two new albums on iTunes, Squirrel Bunny Jupiter Deluxe and Count Your Blessingsz. In celebration of Dennis Flemion's unique and irreplaceable voice, here are six of the Frogs' most famous fans.

6) Beck. One of It's Only Right and Natural's highlights was "I Don't Care If U Disrespect Me (Just So You Love Me)." A college radio hit, the song began with an offhanded aside - "That was a good drum break" - before setting the scene of "a beautiful night, making love to every guy in sight." Beck and producers the Dust Brothers wove that line into "Where It's At," the first single off his chart-topping Odelay. On an album full of clever, witty samples, this remains a highlight.

The Frogs: "I Don't Care If U Disrespect Me (Just So You Love Me)"

4) Pearl Jam. Not to be outdone by Nirvana, Pearl Jam included an actual Frogs recording - the Flemions' cover of "Rearviewmirror" - on the b-side of a single. In 1996, Vedder and company recorded "Smile" for No Code, supposedly based on a set of lyrics Dennis passed Vedder during a Pearl Jam performance.

The Frogs, "Rearviewmirror" 3) Smashing Pumpkins. If the Frogs could be said to have a Number One fan, Pumpkins leader Billy Corgan would certainly be a contender. In 1994, the Flemions played Lollapalooza's second stage; Corgan turned up onstage at the end of each set on lead guitar. When the Pumpkins' keyboardist, Jonathan Melvoin, died a couple of years later, the Frogs joined the band, with Dennis filling in on keyboards and Jimmy singing "1979." Not since the Yes annexed the Buggles for a couple of albums had such an unlikely pairing taken place. Corgan also filmed the Frogs in concert, and had them join in on recordings. Here are the Frogs joining the Pumpkins for a live version of "Bullet with Butterfly Wings," nicely deflating Corgan's supposed rage in the process.

2) Blake Babies. Before the grunge elite formed a Frogs bandwagon, this Boston band named an EP, Rosy Jack World, after yet another It's Only Right and Natural number.

1) Sebastian Bach. Billy Corgan was a strange enough patron, but how do you explain Sebastian Bach, who not long before wore an "AIDS KILLS FAGS DEAD" shirt on MTV? Yet there he was, leading a band with the appropriately double-entendre'd name The Last Hard Men, with Jimmy Flemion on guitar, Pumpkins drummer Jimmy Chamberlin, and Breeders guitarist/vocalist Kelley Deal. This Cream-on-crack supergroup went as far as to make an album for Atlantic Records, with such Froggy titles as "Satan's in the Manger," "Candy Comes" and "If You Want to Rock, Go to the Quarry." Atlantic turned it down, oddly enough, and Deal ended up releasing it herself in a small quantity. Bach went on to Broadway a few years later, so one could say he did his penance.

The Last Hard Men, "The Most Powerful Man in The World"