The (Peep?) Show Goes on at Jumpin' Jupiter, Despite Budget Cuts and Tax Issues 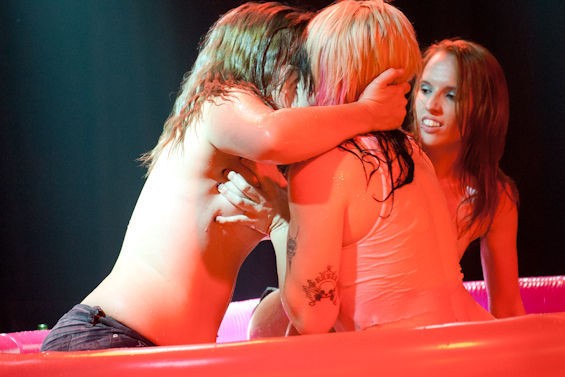 Jumpin' Jupiter, a neo-supper club in Maplewood, narrowly evaded eviction this weekend after owner Jim Callahan settled a dispute with the state for $28,000 he owed in sales taxes. The city of Maplewood agreed to renew his business license on Friday, but the raunchy Saturday night show wasn't exactly a party for the restaurateur, who says he's run out of money and making some tough cuts.

On Saturday night at the Naughty Naughty Late Show, Callahan darts between computers behind the bar, oblivious to the three women on stage who are making out with each other in a blow-up kiddie pool.

After a very public falling out with St. Louis' burlesque queen Lola Van Ella, whose company Van Ella Productions was responsible for many of the shows at Jumpin' Jupiter since last year's opening, Callahan has streamlined operations and tightened the venue's budget... particularly its entertainment budget.

Van Ella took to Facebook last month to accuse Callahan of passing bad checks and not paying performers. On Thursday, Van Ella told RFT Music that, "we have, at this point received most of the money owed to us, which we believe is a result of our decision to make a public statement, which we still stand behind."

A new crew called Synful Entertainment has taken over Van Ella's spot on Saturday nights. Elliot Winter, who runs the company along with several of the dancers, described their shows as "burlesque meets Las Vegas erotica meets drag."

"St. Louis, in my opinion, is like a little brother to New Orleans. We're trying to get back to that walking-down-Bourbon-Street vibe," Winter says, adding that that's not easy in a "conservative" neighborhood like Maplewood.

Doug Miner of the Maplewood-Brentwood Patch has been documenting developments at Jumpin' Jupiter closely, and the coverage of Syn hasn't been met with the best response. Two weeks ago, to promote Synful Entertainment's first show at Jumpin' Jupiter, several of the dancers stood on the sidewalk in costume: fishnets, red panties, and cut up T-shirts. Others danced in the window. A commenter on Patch said the promotion "walks the line of being trashy strippers."

Winter says none of the women in Synful Entertainment are "East Side strippers," as some have speculated. But he does say they are amateurs, working fast food jobs or studying for nursing and teaching exams during the day.

It showed in the weekend's routines. Of the six performers, who were recruited through Facebook and mutual friends, only two have dance training. Most of them have a repertoire of "back it up," "shimmy" and not much else.

In one piece of Saturday night's performance, a woman struts across stage with a whip while another sits "tied up" and gagged. She swishes the whip aimlessly while Rihanna's "S&M" plays. Neither of the women appear to be aware of the music playing or of each other. It looks completely unrehearsed. In the opening number, a send-up of "red necks", three women in wifebeaters throw back PBRs and slosh around in a kiddie pool. A minute in they start making out and -- uh oh! -- their wifebeaters get all wet! A minute later, they're done and it's 30 minutes until the next act.

Callahan and his business partner and fiance Brandy Dunn emphasized that Synful Entertainment is one of many acts that perform at Jumpin' Jupiter. The venue also has comedy shows, concerts, open mic nights, and male performers on other nights. But with its striking art deco flourishes--glass chandeliers over the bar, tiled ceilings, velvety black wallpaper--this is a venue that demands high-end burlesque and smoky jazz.

"This is a multi-use venue and we're going to have a lot of different acts here. We're very excited about our future," Dunn says. Callahan has left her in charge of public relations after a few Biden-esque flubs last month. He told Patch he wants to sue Van Ella for libel (he isn't) and used a terse quote from the Matrix to dismiss her claims against Jumpin' Jupiter. He's been taking a lot of shit lately and he says he's ready to move forward.

"It sucks to run out of money," he said, adding that he's been surprised by the media attention. "but there's nothing illegal about that."

A woman who declined to be identified, but said she has been a supporter and fan of Jumpin Jupiter since it opened, said it's difficult to see Callahan go through financial hardship.

"This place is a jewel," she said. "I don't know what he's going through right now, but I do hope he gets through it... otherwise I'd love to buy this place."