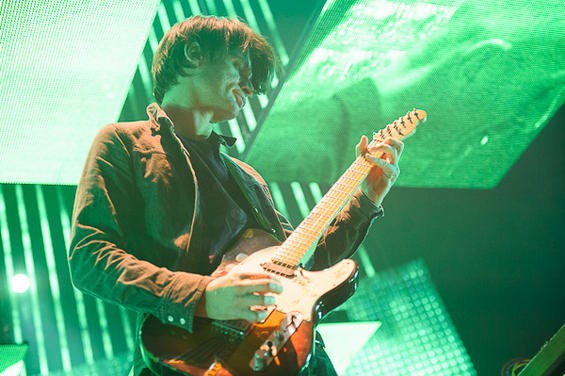 Ever since prehistoric man hit a stick and a rock together and thought "I bet that would sound sweet through a delay pedal," musicians have craved new sonic avenues for their instruments. Here are the six best effect-enhanced guitar solos, including the time in which each solo begins. Let us know what your favorites are in the comments below, and we'll read them and then play them through a flanger.

6. Os Mutantes - "Bat Macumba" (0:30) Os Mutantes was a pioneering force in the late 60's Tropicalia movement, a cell of Brazilian musicians who blended their regional traditional music with importet psychedelic rock. Os Mutantes' first few albums are perfect examples of a group fearlessly throwing ideas to tape and seeing what works, such as the guitar solo on "Bat Macumba." In addition to being hellishly distorted, the sound flutters rapidly as it meanders across the stereo field. It's disorienting - especially in headphones or a pair of very far apart speakers - and it totally works.

5. Radiohead - "Paranoid Android" (5:30) How many of your skinny, guitar playing friends have at one point had an overgrown bowl cut and owned a low-slung Fender Telecaster? How many of those friends love Radiohead? All of them, because the band's lead guitarist Jonny Greenwood is so cool, you guys. He is an inventive, tasteful musician whose few and far between freakouts are much appreciated. Prime example: his solo towards the end of the second movement of "Paranoid Android." Later, after a creepy, lethargic "Rain down" segment, Greenwood reprises his lead with the aid of a bunch of boxes that go "wssshowww" and "shweeeee." Seriously, I get chills every time.

4. Nels Cline Singers - "Square King" (2:24) Nels Cline is most visible as the lead guitarist of Wilco, and some may be surprised at the aggressive streak he shows in his avant-garde jazz trio Nels Cline Singers. "Square King" is the most teeth-baring track the Singers have recorded, sounding something like Deerhoof covering "Something Against You" by the Pixies. Cline's solo is equal parts virtuosity and sculpture, and he uses traditional techniques (slide, whammy bar) as well as mysterious pedal manipulations that produce sounds that do not exist in nature. After hearing Nels Cline wail on "Square King," Wilco's sunniest dad-jammiest tracks seem almost sinister. 3. Jimi Hendrix - "Voodoo Child" (entire song) Hendrix's legacy might have more to do with the way his guitar sounded than the actual notes he played. Whatever aspect of his tone he explored - volume, fuzz, feedback - he owned it completely. On "Voodoo Child," he owned the wah-wah pedal. To this day, there are essentially two camps for this oft-abused effect: "Voodoo Child," in which the hands-free design allows for the sweeping filters of the pedal to act as a third limb of expression; and "Theme From Shaft," in which the pizza guy comes over at the exact moment you exit the shower. Of the two, Hendrix's music has been responsible for more actual intercourse.

2. Talking Heads - "Born Under Punches (The Heat Goes On)" (2:40) Without picking the brains of those involved in Talking Heads' masterwork Remain In Light album, here's how I imagine the opening track went down: Adrian Belew prepped for his guest solo and started plugging in his effects. Brian Eno, sitting behind the mixing board, felt some competition by Belew's sounds and started plugging in HIS effects. This, in turn, inspired Belew to modify his tone even further, which led Eno to try to top him, and this pattern continued until the guitar sounded like a malfunctioning room-sized computer (this was 1980, mind you). As many times as I hear "Born Under Punches," I still only know the solo is made by a guitar because the liner notes tell me so, and my internal reaction is still "Does not compute. Does not compute..."

1. Smashing Pumpkins - "Cherub Rock" (2:55) There are elements of every other solo on this list in "Cherub Rock." There's the caution-to-the-wind experimentation of "Bat Macumba," the rock-god embracing of "Paranoid Android" and "Voodoo Child," and the head-scratching howdtheydothat of "Born Under Punches" and "Square King." Billy Corgan took these principles, added a bit of My Bloody Valentine and Sabbath, and created the best effect-enhanced guitar solo of all time. In the years since, Corgan has become such a parody of his former self that it can be difficult to remember the time when he was even relevant. But "Cherub Rock" is one of only a handful of Smashing Pumpkins cuts that has transcended Corgan's persona. The kids today likely know the song as a level in Guitar Hero, but let us never forget that its unprecedented solo was made by an actual guitar hero.