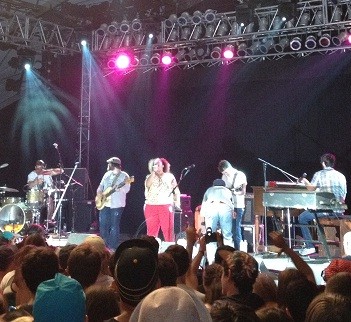 The swelling crowd at Bonnaroo had hardly enough time to process the emotional Dale Earnhardt Jr. Jr. "I Will Always Love You" tribute to Whitney Houston when Alabama Shakes took This Stage slightly before midnight.

After an opening interlude, Brittney Howard and her Athens, Alabama, bandmates launched into their first single "Hold On" as the arena-sized crowd sang along with every word. Howard seemed humbled by the size and enthusiasm of the audience yet confident in her ability to keep it satisfied, particularly in the undulating "You Ain't Alone". At one point, Howard looked at the crowd in wonder and shouted "I love ya'll!!". The feeling is mutual, Brittney.

Famously touted by the likes of Jack White, Alabama Shakes has received a great deal of buzz in the alternative music blogosphere. The Shakes' strong debut album Boys and Girls, combined with last night's epic performance proved them more than worthy. With an undeniable poise and a stage presence that belies her youth, Howard's ability to mix her deep, soulful voice with high-pitched wails made Alabama Shakes the definite high point of Day One at Bonnaroo.

After closing their hour-long set with "Heavy Chevy", Howard introduced onto the stage the brass band Soul Rebels. One got the impression she was merely lending out property she clearly owned.

About the author:
Dave Geeting is a 40-year-old investment banker best known for his calls and emails to the Jim Rome Show under the handle Dave in St. Louis, Non-Hunter. Follow him on Twitter @thegeeter.