The Skekses at the River Confluence for Show Me Shows: The Record is Out Tomorrow 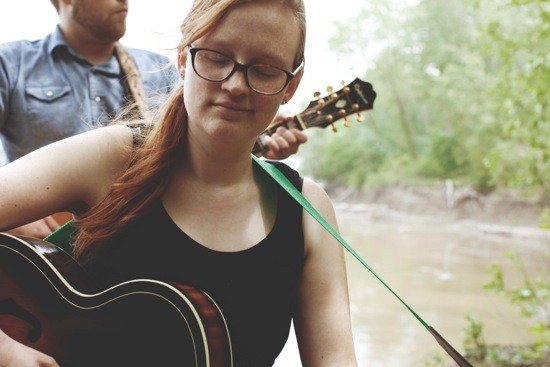 Show Me Shows is a video series documenting bands living in and traveling to St. Louis.

This Friday, June 8, the Skekses will release its excellent new EP, Curse My Name at a show at the Heavy Anchor with Magic City and Lonesome Cowboy Ryan. Read RFT Senior Music Writer Christian Schaeffer's review in this week's Homespun.

Earlier this Spring, we all drove north from an apartment off Cherokee Street, past Cementland to the confluence of the Missouri and Mississippi rivers. We stopped by the side of the road in the area under the care of the Missouri Department of Conservation and took a small path to the edge of the water. Front woman and songwriter Ellen Herget grew up on a nearby hill in a house overlooking the woods and farmland. "I used to walk down to this exact spot and sit and watch the water and play," she says.

Years later she has moved to the city and become an integral part of St. Louis music as both one of its most devout supporters and most soulful voices. Herget's band has changed around her, but over its two proper releases some things are constant: Those endless pipes, her ear for unadorned melody and this place. "The word river pops up several times on both albums," she says. "I think that it's definitely where the peaceful things and my appreciation of the universe come from."

The Skekses' current lineup is a force of multi-tasking St. Louis talent: Evan O'Neal on guitar and vocals, with Anne Tkach (upright bass) and JJ Hamon (various stringed instruments) lending periodic assistance. The full four-piece played a pair of songs that day at the Confluence, starting with "Mama Says the River" and following it with "Sky is Grey," which you can watch below.

Herget's got an unusual eye for finding simplicity in complexity. Among her other pursuits is a gig co-editing the poetry series Bad Shoe, and close listeners to her lyrics will find a befitting respect for language.

"Sky is Grey" doesn't appear on the new EP, but you'll hear it tomorrow night. It's on the lighter, more upbeat end of the Skekses catalogue. "I like that song because it's one of the simplest ones we do," says Herget. "It's a true song. It's pretty, but it's discusses how love is complicated. He thinks he's a hassle, but I'm a hassle so it works out."