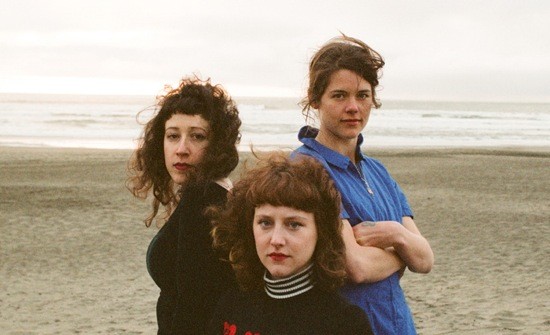 Here's a show worth a weeknight road trip: acclaimed Bay Area trio Grass Widow is playing in Farmington at The Vault (204 South A Street, Farmington, MO, 573-783-0173) this Tuesday, June 5.

Touring on the strength of its strong new album, Internal Logic (the first on the band's own HLR label), this all-female trio has made a name for itself over the past few years for its complex but infallibly melodic sound. On recent singles like "Disappearing Industries" and "Milo Minute," the band matches airy three-part harmonies to bare-boned, occasionally discordant guitar and bass interplay. Picture Pink Flag-era Wire as filtered through Olympia 1991, and you're close. And Grass Widow is able to more than pull off this sound and approach live. Opening for post-punk legends The Raincoats at Chicago's Double Door last September, the band briskly played a dozen gems in half an hour, complete with covers of Wire ("Mannequin") and Portland's Neo Boys ("Time Keeps Time").

The Vault is a year-old space that also shows films and serves food. It's hosted such St. Louis bands as the Rum Drum Ramblers and Pokey LaFarge and The South City Three, and brought in such touring acts as Amy Lavere. According to the Vault's website, owners Tim and Kerry Smith are a pair of screen printers who eventually got tired of traveling hundreds of miles for their music/cultural fix. As Grass Widow has yet to hit St. Louis, it's clearly our turn to do some long-distance driving.

Mike Appelstein: You recently toured with the Raincoats. How was playing with them every night? Do you feel as if you learned anything (about music or otherwise) from them?

Lillian Maring: They are so dreamy. Their style is so genuine, they encourage authenticity to anyone who listens. I see them play and feel inspired to be true to myself.

Your music, in general, has become both lighter and more complex with time. Is that a fair point, and to what do you attribute this progression in sound?

Past Time, our last full length, was written in a very dark time for us personally. Multiple rugs were pulled from beneath us simultaneously, and in the aftermath we were approached by Kill Rock Stars to release the record with them. We had already written half the record, but that definitely put a fire under our asses. The whole record is an attempt to make some sense out of grief. We were tackling subjects without answers, trying to create livable, temporary solutions. Internal Logic was born of a healthier time. We wrote these songs to reflect our desires. We have survived some dark times together, and now that we're here, what do we want the best possible life to be? Many of the songs are affirmations, things we want to sing about every night on tour. Sometimes we address stuff that pisses us off, coupled with a sonic buoyancy and lyrical unity that reminds us that we're here for each other and everything's working out great.

How much effort goes into the vocal harmonies?

We treat our vocals as instruments, kind of as though each song is written for a six piece band. We each control two out of six elements that comprise a song. Sometimes parts originally written for bass or guitar become vocal parts, and vice versa. We're creating a spectrum of highs and lows and our voices fill it out.

You've been on a few labels before starting HLR. What are some of the advantages and disadvantages of doing it yourself? What else can we expect from the label in the future?

We always do a lot of work ourselves for our project. We do have people that help us, like our booking agent, and for the release we have a press agent, but we are very hands on in every aspect of our band, creatively and in business. We like to know exactly where money comes from and where it goes. At shows, we try to make sure money is distributed fairly. Now that we're releasing our own records, we know where we stand financially (way in debt) but at least when we make money, it is coming straight back to us and the wonderful people that we work with. We've learned a lot from working with labels; being on Kill Rock Stars gave us so many amazing opportunities! I think once you have some sort of presence, you can forgo the affiliation with a label and really represent yourself on all fronts. It is a lot of work. We have jobs too, so we're working all the time. But this is something we really wanted to do.

Who or what is "Milo Minute?" (My interpretation: a superhero.)

Milo Minute is the name we gave (guitarist) Raven's Volkswagen van that we drove on our first tour. Before anyone knew who were were, we spent a month touring the U.S. in this sweet van with a pop-top and a mini-fridge. We called it Milo Minute because that was its top speed (one mile per minute, or sixty miles per hour). In the song, Milo represents our desires carrying us beyond our expectations, how a single motive can create its own momentum and change the course of your life. You just have to take the first step, or drive the first mile.

You spoke in another interview about the complicated relationship between female musicians and Internet/blog culture. To what extent does this all affect the music itself - or does it? Do you ever wish for a little less access or a break from the virtual network?

Good press, bad press and jerks who like to tell women how to live are not limited to the Internet, but it does provide those things expediently. So if anything, we just witness it faster and more frequently. You can try to ignore it, but ignoring it never solved anything, so we make sure to address those situations appropriately. It's case by case.

Secrets to making it through a tour without going nuts?

Bring some good pals, drink lots of water. Go swimming when possible. Listen to the audiobook of Tina Fey's Bossypants.

Interviews This Just In