The RFT Music Showcase is Tomorrow: Here's What You Need to Know

The most improbable day of St. Louis music is upon us. It's RFT Music Showcase time, and the lineup is set, the taps are ready and the weather forecast is about as perfect as you could possibly hope for. Tomorrow, June 2, from 2 p.m. to 2 a.m., more than 80 bands and artists across a spectacular range of genres and scenes will show you what this city's all about.

We advocate each set pretty much equally (we did curate this thing, after all), but we would be remiss not to mention a few of the more unique things you can see tomorrow. The Rats & People Motion Picture Orchestra will be performing its original score to the silent film The Balloonatic, projected on the system at Over/Under Bar & Grill ordinarily reserved for sports. Semi-reclusive shred god Yowie will take the stage at Smash Bar at 8:15, and the Force is bringing no fewer than eight of its insanely talented roster of MCs and singers to its late set at Lola. But honestly, you cannot go wrong. Show up sometime in the afternoon and wander toward some sounds you haven't heard before.

The nuts-and-bolts: 80-some bands and artists on twelve stages. They're all between 15th and 9th Streets on Washington Avenue in Downtown St. Louis. $10 gets you into everything, and you can buy wristbands at any venue, including the outdoor stage at 13th and Washington.

The biggest change this year is that most of the venues will start earlier in the afternoon/evening and there are a few more outdoor stages, mostly on patios. We've eliminated the parking lot stage from the last two years. This year's outdoor stage will be in the walkway on St. Charles place south of Washington next to Lucas Park Grille. Nite Owl will kick off the Showcase on that stage at 2 p.m.; the last of the venues will have music until 2:15 a.m.

Some of the set times have changed since we went to print with this year's Showcase issue; for a complete, up-to-date schedule in handy grid-map form, see below. 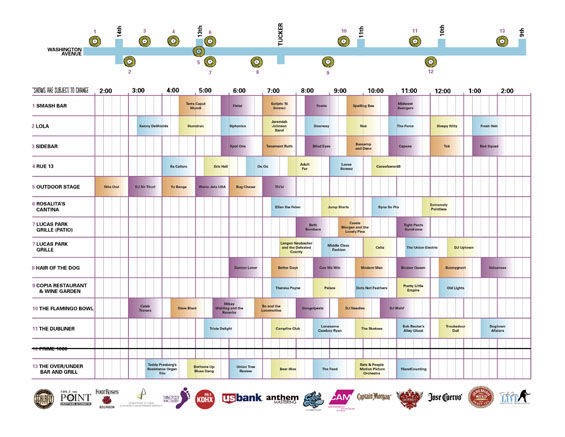 Please note that the St. Louis Police Department will be strictly enforcing open container and underage drinking laws this year. Don't walk around with a beer in your hand unless you want a fine.

And finally, don't forget to vote for your favorite bands for the 2012 RFT Music Awards. The polls close this weekend and we'll announce the winners on Tuesday, June 5 at the Old Rock House.

Click here for information on parking and other miscellany.