Chill Out, Everybody: Best Coast at the Firebird: Review and Setlist 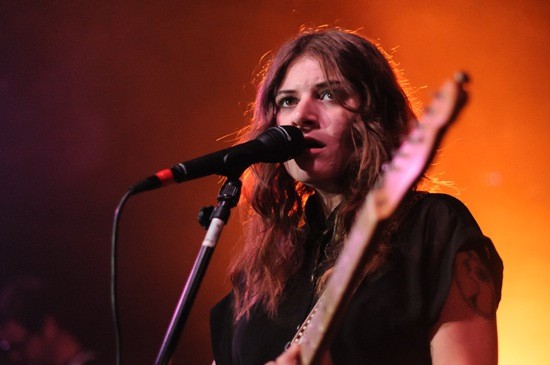 "Why would you live anywhere else?" It was a rhetorical question. Bethany Cosentino can mean a lot more in her California obsessions than one might think, but that doesn't mean she wants answers. But here are a few anyway: Cheap rent, baseball, friends, families, not having to wait hours for a table at a restaurant and a chance to see a good pop band like Best Coast in a good rock club like the Firebird.

Best Coast's "first official show" (Cosentino's words; and the unofficial show?) lasted just over an hour, packed with some 20 songs, including an encore cover of the Stevie Nicks-penned "Storms," all blurring together, even the down-tempo bummers, but no one falls in love with surf pop for the variety. You either love melody or you're in the wrong place.

With the cancellation of JEFF the Brotherhood, bass-free locals Sleepy Kitty and Bruiser Queen filled in gamely, the first starting before my 9 p.m. arrival, meaning I'd only catch a snatch of how poppy they can be, how good Paige Brubeck is as a front woman, how much they can do with a cover of Pavement's "Box Elder" to close out a set. The duo looked and sounded best-drugs-ever happy; afterwards drummer Evan Sult danced around the club like he was riding an invisible unicorn.

Bruiser Queen faired less well, not that it too didn't have plenty of garage-punk joy to share, but every other time Morgan Nusbaum and Jason Potter would lock into a groove Nusbaum's guitar would short out, throwing off the hook delivery and any hoped for momentum. But the duo shrugged it off and when they did race to the end of a song the sound was spirited and trashy in the right ways, setting the school's-out kids in the front to moshing.

The sound of Best Coast's two albums in two years is the sound of a band in love with the studio, even the first, a low-budget collection of two-minute shiver-and-fuzz pop songs, and especially the second, all-dressed-up in girl-group finery with no where to go but down, down, down into the peculiar boredom that comes with postcard-ready sunny days. The tight little rhythms, guitar jangle and vocal processing are nearly as well modulated as Motown, even as the freest free-floating despair sets in. Best Coast wants to have fun in this stupid life, but it's in the sunshine state of the studio that Bobb Bruno and Cosentino find the happiness that's forever slipping away in the puffs of weed smoke from their crash pad couch.

So trepidation set in before my first chance at seeing the band - a simple quartet, two guitars, bass and drums - even on a San Diego-worthy night at a club packed with people mostly shorter than myself. The dudes in front kept bumping around but the sound was better in back, guitars shining and Cosentino's voice showered in reverb and delay. Her mic cut out only once and she just pushed on through the song. On stage she sounds more licentious and less desperate than on record, sometimes even muscular and believably pissed off, as on churning second number "Last Year": "Now I believe in nothing!" It's not "Anarchy in the U.K.," but it's true to the mundanity of this life as she knows it.

Third song "Summer Mood" indicated how the set would go, shuffling between songs from Crazy For You and The Only Place, setting a smart pace, bracketing the "slow jams" (Cosentino's phrase) and letting the clap-alongs burst out, one after another. Bruno sketched out candy-colored scrawls on "Goodbye" as Cosentino tried to keep it all together as everything in her story fell apart: her boyfriend's gone, her mom's not around and her cat really, really can't talk. These are twee problems, but they're our problems too. "Nobody loves a doormat," Robert Christgau recently opined about these songs. That's true enough but everyone gets used sometimes and masochism is a fact of psychology. And could we really ask for more from a good pop band than that it get it and never romanticize it (Best Coast doesn't) - and still sound like the players will never grow up or grow out of loving melody for melody's sake?

By the time "Mean Girls" (a bonus track from The Only Place) gave the answer to "Why I Cry" I may have missed all the self-harmonies of the studio, but the beautifully-extended, Velvet Undergrounded drone opening of "Our Deal" and a luxurious and quivering "Up All Night" more than compensated. The encore began with staccato guitar chops and a burst of noise on "I Want To" and ended with all the sensitive dudes singing along to "Boyfriend."

Still the highlight of the night was the sole cover: Fleetwood Mac's "Storms," from Rumors, a song that, guitar set aside, Cosentino sang like she'd been waiting, through days and days of ennui, just to sing in that moment - and she and the band made that moment count.

The missing JEFF the Brotherhood: "Jake [Orrall] broke his hand," Cosentino explained from the stage. "He was playing basketball in Omaha and his hand got smooshed back."

Overheard: "Do you want to buy a zine?" a kid in a polo shirt and deck shoes asked out in the parking lot. "There are some reviews in it and pictures if you don't like to read." It was the only time the evening got too cute.

Encore:
I Want To
Sun Was High (So Was I)
Storms (Fleetwood Mac cover)
When I'm With You
Boyfriend