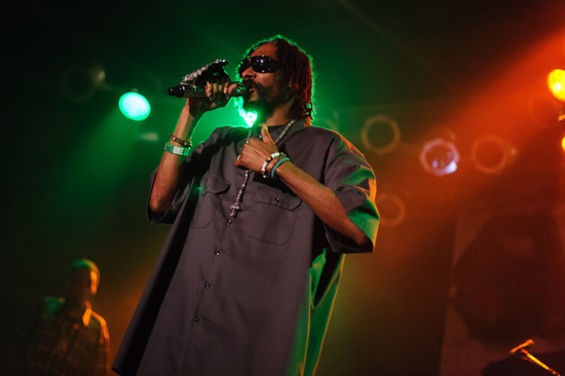 If you hadn't already assumed that Snoop Dogg would be playing to a full house at Pop's last night, the line of people stretching across the parking lot -- hours before his performance -- would be a good indication. Half-naked women, old-school players, frat boys, hooligans, and weed smokers of all ages came out to spend the evening with one of the most legendary entertainers in the history of rap, along with a few other familiar faces.

The night started out hot and humid outside, but nice and cool inside the venue. By the time the headliner made his entrance, the soft breeze blowing through the smoker's patio was a refreshing break from the body heat of the shoulder-to-shoulder crowd. The close quarters may have played a role in a "misunderstanding" in the front row just prior to the first act, but cooler heads stepped in and averted the impending girl-fight. So close...

F.T.I Army's Kold Kace was first on the bill, opening to an anxious audience at 8:45 after a false start fifteen minutes earlier. There seemed to have been a couple of missed cues on the first song, "Fuck Wit Me," but overall the blood brothers gave a solid performance. The local duo gives up a ton of energy onstage, and you could set your clock by their staccato, rhythmic flow. On the flip side, KK's grimey beats and gangster-y lyrics aren't exactly breaking any new ground in the genre.

Steddy P and DJ Mahf followed-up with a set that was more reminiscent of hip-hop's golden era -- creative beats and rhymes, with Mahf doing some serious cutting-up on the turntables. The Kansas City, MO native had plenty of stage presence for the large crowd, and seemed to have left a good impression with many thanks to his distinctly off-kilter delivery and infectious production. "Local Heroes" off the album BATTERMAKEROOM went over particularly well.

You could immediately feel the crowd amp up when the DJ put on "Still D.R.E" around 10:45, minutes before the Doggfather emerged to "I Wanna Rock." Snoop appeared on stage exactly as he does on TV; a tall, lanky figure with a long, curly perm. He was decked out in a khaki suit and locs (sunglasses) with a low-hanging chain and a custom gold mic. His unique voice and overpowering charisma were recognizable from every corner of the room.

Snoop was joined by his entourage, which included Kurupt, his uncle Junebug and a costumed dog mascot, but no Don "Magic" Juan this time around. He also had a few female dancers who assisted on the freakier songs like "I Wanna Fuck You" and "Sexual Eruption." Toward the middle of the set, Lady of Rage was introduced to perform. Watching Snoop, Kurupt and Rage trade verses recalled the days when Death Row Records -- and the West coast 'gangsta" rap scene in general -- were in their prime.

Local rappers Chingy and Murphy Lee were also included in the show; Snoop's former collaborators were each given time to perform a verse.

The excitement never diminished as Snoop played songs from every different era of his 20 year career. Some of the song choices were surprising, and many were shortened by a single verse (or less) to squeeze more into the hour-long set, but the fans loved every minute of it. Before the finale, Snoop passed along his message of "peace, love and soul" to the crowd before ending the show with Young, Wild and Free. 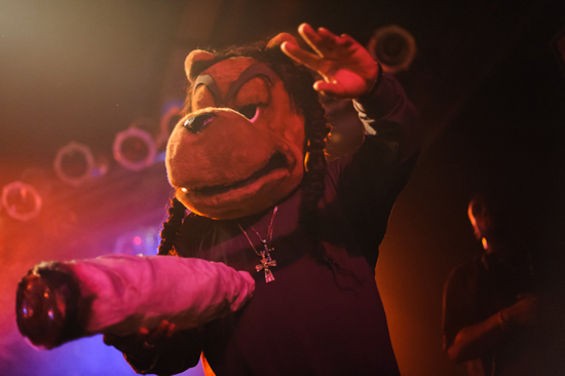 Personal Bias: As a skinny, light-skinned teenager who chronically suffered from red eye and the munchies, I remember being called "Spanish Snoop Dogg." I had mixed feelings about that...

Overheard: "Nigga, you've been working out!" That was Snoop's reaction to the new, improved Chingy.

Setlist: I Wanna Rock Tha Shiznit Smoking On P.I.M.P. The Next Episode Nuthin' But a 'G' Thang Bitch Please Gin and Juice I Wanna Fuck You That's That Shit Down 4 My N's Let's Get High We Can Freak It (Kurupt) G Funk Intro (Lady of Rage) Afro Puffs (Lady of Rage) Ain't No Fun (ft. Kurupt) Right Thurr (Chingy) Welcome to Atlanta Remix (ft. Murphy Lee) Sexual Eruption All I Do is Win Jump Around Drop it Like it's Hot Who Am I (What's My Name) Young, Wild and Free