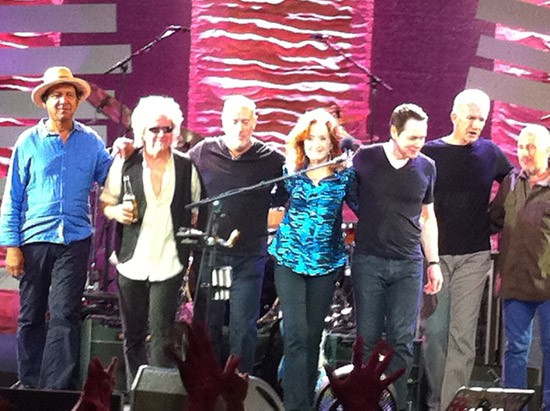 They'd come in from Kansas City, Columbia, Minneapolis, Chicago, Louisville and West County -- and places further, I'm sure. The general admission ticket holders lined up outside the Halo Bar four hours or more before the doors would open, tailgating in their own way with vases of vodka-spiked iced tea and lemonade and take-out pizza. Many had never been to the Pageant before, many more were astonished that Bonnie Raitt was playing such a venue. "Are there seats and tables inside?" one woman asked. "How do I get one?"

Another, like her friends, in a hand-embroidered blouse and sandals, waved her arms in the air and started a sing-along to "Not the Only One," from a moment in time when the blues burst fully into pop in a way that it rarely does. The soulful, sexy and expert music of Bonnie Raitt, and - the loaded word must be used - the authenticity of her persona can still make an impression. Hearing and seeing the really real thing always does.

Seven years ago you would have been a fool to bet that Raitt would return with an album like Slipstream, her best since Luck of the Draw, sounding up-to-date and fully-connected to the blues, soul, rock, pop, folk and reggae that the force of her character and musicianship has long fused into a coherent, signature sound. Raitt had withdrawn from the spotlight, having lost a brother, her parents and a soul mate over a period of five years. She still performed but hadn't dared to mount a stateside tour like this.

So there's nothing nostalgic about Raitt's return to form. It's as cool, true and searing as a steel tube on steel strings.

With just fine guitarist Shane Fontayne to back him up, Marc Cohn -- tapped by Raitt for this leg of her tour; Mavis Staples will be joining her in the late summer -- knew full well that he'd have to push hard through his half-hour opening set to keep the sold-out hall from crushing him in chatter. He did what he could. "Listen to the music," he said from behind his piano. "You can drink later." Along with surviving a bullet to the head in 2005, Cohn has survived the fate of being to many just a one-hit wonder (the irresistible "Walking in Memphis," which he played, but only after joking that he wouldn't). He really is more than that. His set relied on choice cuts from his 1991 debut, but the most powerful moment for this blue-eyed soulster took the form of "Listening to Levon," a song from his 2007 album Join the Parade. "I was lost, I was gone, listening to Levon," he wailed out. "In another place, in another world." Cohn demonstrated that, when given the chance, he can still take an audience - or at least the half that mustered the decency to shut up - all the way there.

At 9 p.m. sharp Raitt, with weathered Stratocaster around her neck, blew some kisses and called out, "I love this place!" And over the course of 18 songs she sounded like she meant it, that she was genuinely moved to be performing so close to an audience, that she was "back in a club," turning up her amp, giving some old-school grinding in her tight pants and ruffled turquoise blouse. "I'd jump down in there," she later said to the pit, "but then you'd know the secret in these clothes."

"Used to Rule the World," the lead track on Slipstream, started things off with a New Orleans R&B groove and the first of many fiery slide solos. She teased the audience that she thought about playing a Donna Summer song the band had done at soundcheck, but instead turned to her improbably funky reggae version of Gerry Rafferty's "Right Down the Line" also from Slipstream, and the first of many homages to underrated musicians (St. Louis bluesman Leroy Pierson would get a dedication) and bands (NRBQ, which she has long championed). Raitt is obsessive about giving such thanks; it's part of what makes the word authenticity stick. "My band does all the work," she said. "But I get all the credit."

It's not true, of course, because she works a stage not like a star but like a hard-living, hard-playing member of a great band - drummer Ricky Fataar, bassist Hutch Hutchinson, guitarist George Marinelli and keyboardist Mike Finnigan - and it's never a put-on. On "Give Them Something to Talk About" she took a break, with a cocksure gleam in her eye, biting her lip and sneaking a smile as if to say, "Yeah, I've still fucking got it. Now what you got?" Between songs she bantered with the audience and the musicians, applied lipstick, sipped from a travel mug, and then went back to killing it again and again, because that's what a Rock and Roll Hall of Famer had better do. So what if she flubbed a line from "Not the Only One" and so what if her voice has gritty hoarseness on the high notes? She can still hit them, in her own way, and still makes a song like "Angel From Montgomery," which she has sung more times than any number in her repertoire, so beautifully and agonizingly desolate and human.

Other highlights included a playful snatch of the Ernie K-Doe hit "Mother-in-Law," some riveting and disjointed piano lines from Finnigan on Dylan's "Million Miles," a "never played before" version of "Take My Love With You" (from Slipstream) and a stage-shaking John Lee Hooker boogie take on the Al Anderson song "Ain't Gonna Let You Go." For the first encore she sat alone, without guitar, and sang all of the pain into and out of "I Can't Make You Love Me," one of the most darkly frank songs ever written, and then, as the ovation died down, shifted straight into the steely and slinky reggae of "Have a Heart" from Nick of Time. For one final encore, she invited Cohn back on stage for Van Morrison's "Crazy Love."

As if she knew it might be another decade before she'd come back to St. Louis, she gave the song and us everything she had. And that's what the really real thing is all about.

Personal bias: I first saw Raitt on the campus of the University of Utah in the early '80s, and though I've missed her previous St. Louis dates at the Fox and Riverport, I did catch her on the rotating stage of the Westport Playhouse on a tour with Richard Thompson. As excellent as I recall that show being, last night went to a place that was deeper emotionally and grander musically.

Notes on audience: Though the crowd was dominated by the Lilith Fair generation and their significant others, it was clear that Raitt, who hasn't had a hit in decades, has connected with fans barely alive when Nick of Time came out. They sang along with every tune they knew, and some they didn't.

Encore 1:
I Can't Make You Love Me
Have a Heart