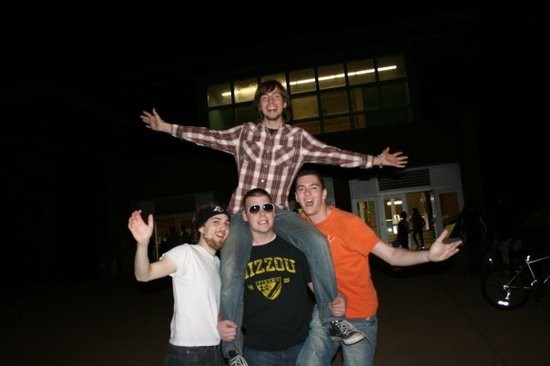 Back in 2008, the Educated Guess released two fine, grandiose albums, Beautiful Strangers and West Skyline Drive, that paired big-sky Americana with well-orchestrated arrangements that called to mind the symphonic masterpieces of Roy Orbison and Born to Run-era Springsteen. After that initial burst, though, the band retreated back to school, the studio, and to real life. Brumley also took time to focus on his vocal arrangements with Lindenwood University's choir, which yielded the impressive "1861" song cycle about Missouri's role in the Civil War. Give him a full beard and some slow-panned images and Brumley could become our music scene's Ken Burns.

This evening, however, the Educated Guess, along with its strings-and-horns counterpart the Emporer Norton Orchestra, returns to Off Broadway with its first new songs in three years. Pianist, singer, songwriter and arranger Charlie Brumley corresponded over email to talk about the band's long hibernation and what to expect with tonight's show (hint: Off Broadway's stage may sag beneath the weight of Brumley's cohort as well as his musical ambition). The show begins at 9 p.m. and tickets are $10 and $12.

Christian Schaeffer: The Educated Guess has been quiet for some time -- what have you been doing in the meantime?

Charlie Brumley: We've been finishing up school these past two years and are finally back home in St. Louis for good. Making music during summers was fun, but we needed to refocus what we wanted to accomplish musically.

Johnny [Venegoni] (our bassist) does comedy all around town and Brian [Pincus] (our drummer...the adult of the band) got himself a real job. I just finished a degree in composition, but I mainly work on organizing the existing songs I've written into albums. We're unbelievably excited to be making music again and can hopefully start doing a few records each year. It's long overdue and I feel more comfortable writing and arranging this time around.

The style of music your band plays -- symphonic rock & roll -- arguably takes more time and investment from a songwriting, arranging and rehearsal point of view. Why make it so hard on yourself when you could just as easily play as a four-piece?

I ask myself this question all the time. My favorite records -- Phil Spector, ELO, Roy Orbison, The Supremes -- all have this remarkable lushness and beauty, and a degree of craft and detail that I've always appreciated. I think musicians and audiences appreciate it too, and challenging the band to do something so difficult is very fulfilling. I just feel blessed that so many have lent me their time and talent.

A few months back, you had started a search for a new lead singer. What is the status of that search, and why did you feel it was time to give up the role as singer?

I started to figure out how to better assign songs and distinguish those suited for my voice and those suited for a different style of voice, which is hugely liberating. To be honest, I like singing, but I love writing more, and especially for people with serious vocal chops. So for this current project, I've been pursuing a singer that would be authentic to the genre, which will make the music more convincing in my mind. This process is still ongoing, but without giving too much away, we're on the right track.

What was the impetus behind "1861," your song cycle about the Civil War performed by the Lindenwood Concert Choir?

I had a real paradigm shift in my views on the Civil War after reading a lot about Missouri a few years ago. I've always been fascinated with questions of American identity, and the Civil War is one of the most stirring and dark periods in regard to such questions. I found a story that I felt compelled to tell musically, and knew it could only be told with voices (and no instruments). I'm fortunate to have had such an amazing performance by an amazing choir; Lindenwood was very supportive of me and it ended up being a far more moving experience than I could have anticipated.

I was actually a history major half way through college before deciding to give this music thing a shot. Needless to say, "1861" brought these two passions, music and history, full circle. And it didn't hurt that 2011 was the start of the Sesquicentennial Anniversary.

As a pop songwriter, how do you marry your more classical and historical loves with the three-minute pop song? Are they necessarily different pursuits?

They are definitely different crafts, but the approach is similar. When working with my composition professor, he would always ask (typically of weaker sections in a piece of music), "Is this what you *really* want?" I learned to trust my instincts more and anticipate criticism (whether my own or of others.) This process of stepping back and looking at music honestly and objectively helps both songwriting and composition. It also means longer turnaround, but I end up having less reservations when a worked is "finished."

What can we expect at this Friday's show?

Sixteen musicians onstage making a racket. This is the music I've been wanting to write ever since The Educated Guess came to life, but I've never had the arranging chops to do it. We have an wonderful vocal quartet, a spectacular string section, and a dynamite brass quintet. The songs are fun to play and Brian and Johnny sound absolutely incredible. Everyone has put in a lot of time and has worked really hard. There will never be a better time to see what our band is all about.