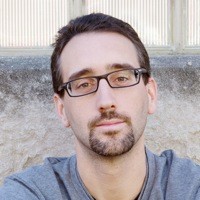 KDHX (88.1 FM) Co-Executive Director Nico Leone will be leaving his post here to take a job as the General Manager of KCUR (89.3 FM) in Kansas City. He'll start on August 1 and remain at KDHX until then.

Leone has been with KDHX for eight and a half years. He started as Music Director and has been serving as Executive Director with Beverly Hacker for the past five.

"I moved here from Austin ten or eleven years ago and KDHX is how I discovered the city," says Leone. "Like so many people in St. Louis, it's how I've connected to the community.

"It's been an honor and a privilege to have worked here, alongside so many great people -- so many people passionate about music, art, culture and St. Louis."

Leone stepped into his unique joint leadership role with Hacker as part of a station-wide refocusing effort to extend and deepen KDHX's involvement in St. Louis directly. Leone has been in charge of the public-facing programs at the station, including partnerships, and a string of successful fundraising efforts -- one of which is the ongoing capital campaign to fund the move to KDHX's future home in midtown.

"I've never been sad about losing a boss before, but KCUR couldn't be getting a better person for the job," says KDHX Marketing Director Chris Ward. "As my superior, mentor and friend, I've been lucky to see this amazing thing called KDHX evolve in incredible ways under Nico's and Bev's leadership."

KCUR is a highly respected news outlet and NPR affiliate. It has had two GMs in its 55 year existence -- Leone replaces Patricia Cahill, who was there for 25 years and was recently appointed to the Board of the Corporation for Public Broadcasting by President Obama. Leone says it was too perfect a fit to pass up.

"It offers me an opportunity to take the work we've done at KDHX with community engagement and do it in a different way," he says. Still, it wasn't an easy decision. "I wouldn't have been able to say yes if I wasn't fully confident in the staff, board and volunteers [at KDHX] to continue the work we're doing."

KDHX will not be hiring a replacement. "We have a spectacular staff," says Leone. "People will step up. KDHX is so much bigger than one person."

Hacker will resume her former role as sole Executive Director and the remaining staff at KDHX will help continue the projects and operations currently managed by Leone.

"We're going to continue to do great things in this community the way we have for 25 years," says Ward. "For any of us to be a part of this thing, for any amount of time, is incredibly special. The music plays on."