18&Counting Stan Chisholm, a.k.a. 18andCounting, is an interesting character. The description "renaissance man" is inevitable. And while Chisholm is not DaVinci, his art consists of murals and installations do ponder humanity's relationship with Earth. His OneLiners series is full of bitter truths ("YourBlogWillBeSeenMoreThanYourGrave") and challenging wisdom ("PeopleHaveTheRightToBeDumb"). Throughout his artwork, there is rampant eroticism. It can be difficult to discern the main idea Chisholm is getting at. Within the context of his music, however, 18aC's mindset is clear. As a DJ, Chisolm is less party-starter and more homebody. During his sets he flirts with bass drops and emphasizes fluid vocal performances over beats made to make a body obey. He leaves the pandering stuff at home. At his most club-friendly, he layers the infectious claps tracks like Chingy's "Everybody in the Club Gettin' Tipsy" over a beat that incites more of a wiggle than an ass-shake. There is a cerebral quality to 18aC that distinguishes him from many of the DJs in town. While most go for kicks, 18aC goes for art. --Blair Stiles 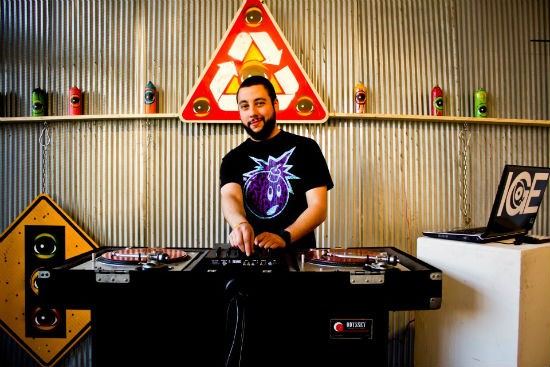 DJ Mahf Watching DJ Mahf spin records is like watching a baby grizzly bear hunt spawning salmon on the Discovery Channel. There is the same amount of exuberance, as though every song transition is the first time. Both creatures move with the same free-wheeling tilt, an off-axis bend to their motion that gives Mahf the look of someone who isn't taking himself too seriously. It's easy to root for Mahf during his sets. Never has a man looked so happy at work. Just one look at him and there is this feeling that Mahf is going to bring the fun. Which is good, because Mahf is a busy man who needs the everlasting energy of youth. Two weekly spins, Tuesdays at Pin Up Bowl and Fridays at Clayton's Area 14, give Mahf enough publicity to support his ― and his Indyground label cohorts ― latest efforts. And ask yourself: When was the last time you knew a DJ ballsy enough to throw together a mix-tape with a mash up of M.I.A, Audioslave, the Clipse, Rage Against the Machine and N.W.A. with an intro from Jack Black and Incubus? --Blair Stiles

DJ Needles A long-running favorite in the "Best DJ" category, James Gates (a.k.a. DJ Needles) has pretty much done it all and hit every hallmark of a great DJ along the way. Live Radio? Check. Needles has been on the air for ages ― he currently hosts Rawthentic on KDHX (88.1 FM). Remix albums? Check. His "Jazzyphatnappy" series is on its eighth volume, let alone the myriad of other projects in his archives. Beats? Check. Under the pseudonym Nodzilla, Gates has been producing beats for local artists like Tef Poe, Black Spade and Indiana Rome for years. Credibility? We won't even justify that with a response. Comparing against a resume as robust as Needles', you'd have a tough time finding anyone better-respected amongst music fans, recording artists and fellow DJs alike. If you've never watched Needles work the turntables, you're doing yourself a huge disservice. --Calvin Cox

DJ Sir Thurl Well-known as "The Official Party Starter," Sir Thurl has been a force on the St. Louis hip-hop and party scene for over fifteen years. DJ Kut ― Nelly and the St. Lunatics "flagship" DJ ― took him under his wing and brought him into the game, and Sir Thurl has since spun for nearly everyone who has come up in the area, including gold-selling artist Murphy Lee. Sir Thurl is the CEO of Allstar DJ Sevice and has a prime spot on Hot 104.1 FM as half of the Lou Gotti Boyz ― with DJ Cuddy ― and the host of the STL Playlist Mix. He DJs at the Loft and the Junkyard Bar & Grill and recently collaborated with Murphy Lee on the mixtape Mr. Winter Time ― I'm Cold. --Tony D'Souza

DJ Uptown Nominated for a RFT Music Award two years running, DJ Uptown is among the busiest DJ's in the city. On the tables at various clubs at least five times a week, he holds residencies at Atomic Cowboy, Delmar Lounge and Novak's. A former Air Force intelligence officer, music has always been a part of DJ Uptown's life ― a huge factor in his rise to the top of the St. Louis DJ ranks over the past five years. Though lots of DJs have been spinning in the city longer, few have made such an impact. His versatile collection spans Top 40 to the roots of hip-hop, he's twice competed in Red Bull's Thre3style DJ Battle and has on-going projects with the Basement System and Jason and the Beast. --Tony D'Souza