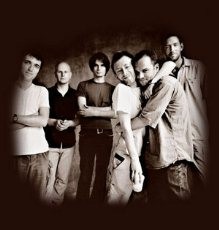 If there was ever an example a good musical soldier, it would be Nigel Godrich. The British producer has been an essential behind-the-scenes figure with Radiohead for years and years and years, so much so that he's colliquolly referred to as a sixth member of the band.

Radiohead's titanic sound shift throughout the years may have confounded most producers, but not Godrich. He's deftly moved the band from being another cog in the 1990s alternative rock machine to one of the most influential groups in the world. Certainly the actual band members deserve the lion's share of credit, but a wise producer can stop a group from doing incredibly stupid things.

But while it's easy to envision producers as introverts who fiddle with buttons all day, many are actually talented performers themselves. Pitchfork reported that Godrich had started a new band called Ultraista with fellow producer Joey Waronker. This isn't the first time Godrich emerged from the producer-y shadows, as he played with Thom Yorke's live band Atoms for Peace.

What Godrich is doing is not entirely unusual. Producers have long dabbled in the public musical sphere, both before and after keeping busy with behind-the-scenes work. And while some endeavors have been decidedly low-key, other producers have become successful performers in their own right:

Godrich and Fridmann seem to be following analogous trajectories. Fridmann is well-known for his association with the Flaming Lips, a partnership that goes back before the band recorded experimental material. But unlike Godrich, Fridmann actually was a part of the band Mercury Rev before he became established a producer. Fridmann played double duty for Mercury Rev, serving as both the bass player and the producer for the band's records.

Like Fridmann, the Canadian producer established himself in his own right as the leader of the Vancouver-based Payolas. But his bread-and-butter has been producing records for groups such as 311, Aerosmith, Bon Jovi and - most notably - Metallica.

As seen in the film Some Kind of Monster, Rock actually subbed in as Metallica's bassist after Jason Newstead left the band. He recorded all of the bass portions on Metallica's St. Anger album before the group hired Robert Trujillo as a full-time member.

Before he blew people's minds with his Wall of Sound, Spector was a member of a pop group called The Teddy Bears. He and other group members recorded the highly-successful song "To Love Him Is to Know Him." Not only did that song go to number on the Billboard Hot 100 charts, but it was covered by mega-famous artists such as The Beatles.

Unfortunately, Spector's talents as both a performer and a producer are largely overshadowed by his conviction for murder. That, and his absolutely crazy hair during the trial. Butch Vig

Vig struck gold in 1991 when he served as producer for Nirvana's Nevermind, the type of accomplishment that someone could chisel on a musical legacy. But in additional to the nearly endless string of albums he's produced over the last few decades, Vig managed to become a star on his own accord as drummer for Garbage.

Vig would almost be the gold standard for producers who are also musicians, since the group has sold millions of records since launching in the mid-1990s. Why almost? Well, there's still...

It seems hard to believe now, but West started off his career producing for other artists. And despite his fruitful collaborations with performers such Jay-Z, few people took West's aspirations to perform seriously. In an interview with Hit Quarters, Chris Anokute - Universal Motown's senior vice president for A&R - recounted how West's ambitions were routinely quashe:

After paying my dues I eventually became an assistant - assisting the admin for projects like Sum41, Ashanti, Foxy Brown and Jay Z's Blueprint. Kanye West was coming into the office - he would always stop by our side to pick up his producer cheques because at the time he was a producer for Def Jam artists. No one was taking him serious as a rapper but he was relentless.

He would play me demos in my 'cubicle' and tell me how one day he'd be the biggest artist in the business. That was probably the most memorable part of the internship, because to see Kanye be so successful now, all I remember was 'the dreamer' in Kanye. And that alone is inspiring - dreams do come true!

West of course is not the first - and probably won't be the last - producer who struck gold as a hip-hop artist. Missy Elliot worked behind the scenes before she one of the most popular and critically-acclaimed rappers of all time.

It's a fair assumption to say that both West and Elliot's producing past helped their solo careers, as it provided them both with enough perspective and experience to differentiate themselves. Could Godrich follow in their footsteps? That may depend on whether Radiohead decides to complicate his day job.