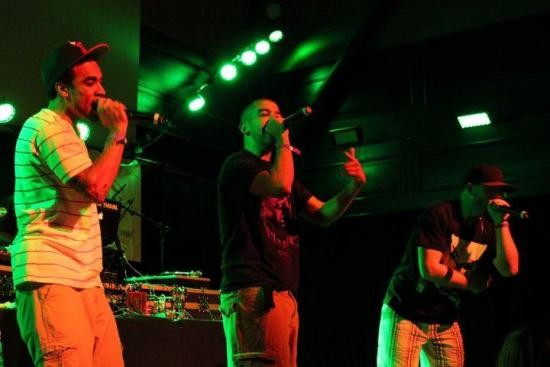 Rapping tends to be a solitary exercise, a musical journey where an emcee combines poetic dexterity and creative self-expression to captivate an audience. But there's something especially impressive when a group of performers band together, unselfishly sharing the spotlight for the greater good.

Such is the case with RT-FaQ and WhiteOut, two members of the Fairview Heights-based Doorway collective. The two rappers released a video recently for "When the Stars Come Out" aimed at showcasing the group's sound, as well as giving even more visibility to the effervescent Cherokee Street. The song also features an appearance from Family Affair.

RFT Music caught up via e-mail with Nick "WhiteOut" Menn and group manager and engineer Cory Rose to peer behind the scenes of both the collective and the eye-popping video for "When the Stars Come Out." Questions and responses have been edited for clarity and length.

Jason Rosenbaum: Explain a little about Doorway and how it got started.

Nick "WhiteOut" Menn: Doorway is a collection of emcees, producers, and behind the scene talent originating from the East Side of STL. The emcees consist of WhiteOut (Nick Menn), RT-FaQ (Ramel Prince), L-Gifted (D.J. Hendricks), S.D. (Charles Crape) and Veo (Virgil Patterson).

WhiteOut, L-Gifted and S.D. started Doorway around ten years ago when Whiteout and L-Gifted were in 8th Grade. And over time it's evolved into a business and a healthy staple in St. Louis hip-hop culture. Each artist is capable of producing solo records and group records, all of which are coming sooner than later.

In the end, Doorway is hardworking group of entertainers and people looking to walk through the doorway of success in the music industry.

What sort of work went into making the video for "When The Stars Come Out?"

Cory Rose: The video was shot with Joe Lombardi of AZTech Productions, with the special effects being done by his partner DJ Cosgrove. For the special "stars" effect, we actually just used tennis balls as markers and Cosgrove later on added the effects over the tennis balls.

NM: The overall theme of the video was for us to literally bring stars out on the town with us to the show. The special effects crew did a great job with making that happen. All you need is a tennis ball with some tracking tape on it (along with talented F/X people) and you can make stars.

Did you try to put forward a particular theme or message within "When the Stars Come Out?"

NM: As far as messages go, there wasn't anything too profound we were trying to pass off with this video. We really just wanted to have a good time and accompany the good feeling of the song with a great visual. "When the Stars Come Out" is referring to the stars of the hip-hop underground scene here in St. Louis: Coming out on the town, having a good night and putting on a good show for the people. By calling ourselves "stars," we're also referring to the feeling of being a "star" and having that extra glow about you when you know you're feeling good.

How's the response been to the video thus far?

CR: The response so far has been nothing but great. It really has served its purpose in what we were trying to do with it - and that was to blow people away.

NM: So far it's spreading at a decent rate. It's definitely viral throughout our local avenues and by word of mouth, which is always awesome. The word most used to describe the video so far is "dope," which is not a bad thing at all.

I think people are responding well to the special effects, the song, the cameos and the backdrop of the video. [That includes] 2720 Cherokee and Cherokee Street, along with other sites in St. Louis and East St. Louis. The video is a collective effort from all different type of people in STL, from all sides: east, west, north, and south. Everyone came together to make something dope, and that's definitely helping with the response as well.

I don't mean to sound cocky at all, but I literally haven't heard one bad thing said about the video. So that's a great feeling.