Speakers in Code's Jason Gonulsen: "That's All Everything Really Is: An Opinion" 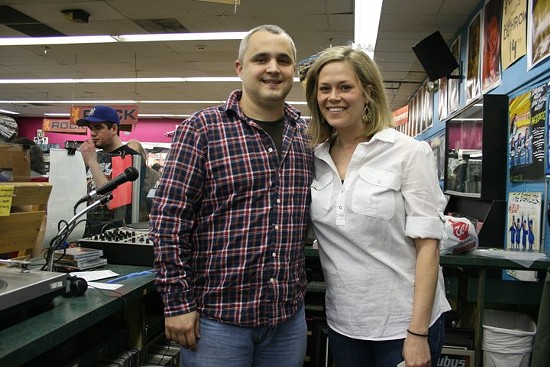 St. Louis bloggers Jason Gonulsen and Katie Guymon met when they began collaborating on a singer-songwriter column for the online publication, Glide. Their column was named "Strangers Almanac", an allusion to an album from Ryan Adam's first band, Whiskeytown. "Katie and I listen to a lot of different types of music. But, the two things we can agree on are Wilco and Ryan Adams," says Gonulsen. "We pay homage to the music we both agreed on. We thought it was cool to name it after a song, lyric, or album that presented our tastes." After a few years at Glide, Guymon came to Gonulsen with an idea to begin their own blog. When the two were decided on a name, they kept with the theme of the Glide column and named their blog after the other act they can both agree on.

Gonulsen, Guymon, Chicago based Darren Grady, North Carolina residents Matt Smith and Aggie Donkar follow a simple philosophy: "We focus on writing about what we love, and not be music critics. Our blog is more sharing what we love. Most of the time we're trying to tell a story or have artists tell us their story."

The sagacious Gonulsen talked with RFT Music via phone, where he held forth on music's ability to unite, gave advice that resonates with writers everywhere and explained Speakers in Code's unique features.

First Entry: January 4, 2010: The first entry was a Jam of the Day. It was the Wilco song, 'I Can't Stand It' that Katie posted. It's what we threw out there to get it rolling. But, the first bench mark post was an interview with Neal Casal, the guitar player for Ryan Adam's and The Cardinals. It was one of the first posts that really made us think, 'Maybe we are reaching people.'

Purpose: What we're really trying to do is share our experiences and our passion. Share what we love. Hopefully people can find out a new song or two that they haven't heard before and share it with other people.

Why That Focus: We're connected through music. Music brought all of us together. If it wasn't for music, we wouldn't have known each other.

Favorite Entry: One of the first times when Katie and I really collaborated was when we reviewed the Avett Brothers at The Pageant. That was Katie's first time getting a photo pass for a show like that. She got the pass, and I reviewed the show. It brought it full-circle. A nice collaboration of words and pictures. It was a really cool thing. Also, Katie reviewed the Lauryn Hill concert at the Pageant. And Katie really liked it, but there were a lot of really negative reviews on that tour. We had comments from January to July. People just kept on posting about that. It's nice to see people give their opinions. Because at the end of the day, that's all everything really is: an opinion.

Tools of the Trade: Jam of the Day keeps us posting every day. That's our core. It sort of something that keeps it moving. The thing we like to do with 'Jam of the Day' is not just post a song but write about it. We really want to make writing personal and witty, or maybe something in between. What we're really trying to do is share our experiences and our passion.

Hometowns: Hometowns is where we ask an artist a few questions about where they grew up. Katie and I both agreed that when we think of our hometowns we think of places we went to or experiences we had growing up. What you love about music really can relate to how you grew up and where you grew up. It's to give the reader a different perspective. That's turned out to be a really rewarding feature for us and hopefully for the people who have read them.

Ten to Spin: An artist gives us a playlist of ten songs with a certain theme. We've had almost 50 of those posted.

Best Thing About Blogging: We've gotten to do some really cool stuff. We've organized two house concerts, we've had musicians stay at our houses. I remember one time at the Old Rock House Tift Merritt was playing. She invited me downstairs after the show and we just talked about life for a hour. It's cool to make relationships and have an open mind."

Biggest Difficulty in Blogging: To say 'No'. At first we were hungry to get things moving. You can't do everything. It's that feeling you have where you wish you could do more but you know you only have a certain amount of time. And if we commit to something we really want to cover it well and write about it well. If you're going to commit to something, give it everything you have and don't take on ten projects at once. I would rather do one thing really well than fool myself into thinking I can do everything.

Something You've Always Wanted to Blog About: I don't know! We get a lot of submissions and sometimes I'll put them all on a playlist and hit 'play' while I'm working. The last band that really caught my ear was the Lumineers. But, the new Brandi Carlile album that's about to come out in June is wonderful. I can't wait to write about that.

Why You Should Start a Blog: If a person thinks they can be committed to constantly sharing and constantly listening to new music and exploring, and having the goal in mind to share and not necessarily receive: they should start a blog. And if you have a blog, you're never going to forget about anything. It's always going to be there.