Minute by Minute Was Michael McDonald's Zenith as a Doobie Brother 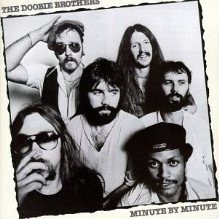 Although known more for his solo success, Michael McDonald scaled great artistic and commercial heights as a member of The Doobie Brothers. It may seem hard to believe now, but that band was one of bigger - if not the biggest - bands that reigned throughout the 1970s.

Not all of the group's achievements relied on McDonald's handiwork, but the Ferguson native did play a big part in making Minute by Minute a commercial triumph. The album was number one on the Billboard Top 200 on this day in 1979.

McDonald was brought into the Doobie fold after lead singer Tom Johnston had become severely ill. Johnston eventually left the group altogether in 1977, paving the way for McDonald to become the permanent lead singer until the group dissolved in the early 1980s.

It's not entirely surprising that members of The Doobie Brothers would become a tad lethargic. This is, after all, a band that from 1971 to 1978 released a new album every single year. But Minute by Minute's rise in the charts was surprising, considering Livin' on the Fault Line didn't have any sizable hits.

In fact, Minute by Minute

Other mainstays on the album included the Grammy-nominated title track, which went to number 14 on Hot 100. Also notable was "How Do the Fools Survive," which featured an improvised solo by the very talented Jeff "Skunk" Baxter.

Bruce Eder of Allmusic notes that Minute by Minute is the effective debut of the "new" Doobie Brothers, a transition personified "with a richly soulful sound throughout and emphasis on horns and Michael McDonald's piano more than on Patrick Simmons' or Jeff Baxter's guitars."

"Given the keyboards, the funky rhythms, and McDonald's soaring tenor (showcased best on "What a Fool Believes"), it's almost difficult to believe that this is the hippie bar band that came out of California in 1970," Eder wrote. "There's less virtuosity here than on the group's first half-dozen albums, but overall a more commercial sound steeped in white funk."

While the album turned out to be an unexpected success, it came at a cost. Baxter - who had previously toiled in Steely Dan - and drummer John Hartman ended up leaving the band after the release of the album. McDonald continued on his visible music career after The Doobie Brothers disintegrated for the first time in 1982.

In addition to songs he wrote for himself such as "I Keep Forgettin' (Every Time You're Near)," McDonald also participated in fruitful collaborations with James Ingram and Patti LaBelle. But within McDonald's buyout musical legacy, Minute by Minute definitely is one of his biggest accomplishments.

In honor of Minute by Minute's achievement, here is "What a Fool Believes:"