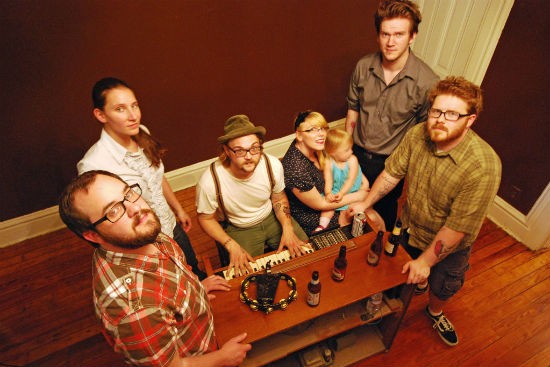 Campfire Club With the recent wave of neo-crunchy folk-pop bands like the Head and the Heart, Blind Pilot, the Lumineers and all the rabble of their followers, it's getting harder and harder to separate the wheat from the chaff. The musicians -- sometimes as many as five, sometimes fewer --- of the Campfire Club have begun to separate themselves on the strength of Ryne Watt's songs, which have all the romantic optimism of youth and campfires, but which also have dry wit, that elusive tonic to folky earnestness: "We don't care if anyone can hear," Watt sings on the band's eponymous anthem. "We're not singing for you." That may not be true, since the Club's shaggy harmonies beg to be joined in sing-alongs, and the mix of guitars, mandolins, banjos, fiddles and percussion is built for clapping and even dancing along. If these are fireside songs, they're scorched by the tipsy joy of collective music making. --Roy Kasten

Cassie Morgan & the Lonely Pine Cassie Morgan sings with the wisdom of someone twice her age and the grace of a child half it. She and Beth Bombara create some of the most reliably transporting folk music in St. Louis or anywhere -- their spare constructions and simple harmonies leave plenty of room to absorb Morgan's familiar, honest lyrics. The two last released new music in 2010 with the highly praised full-length Weathered Hands, Weary Eyes, but they've remained a presence in the city's music world -- look for their appearance in Bill Streeter's ambitious Lo-Fi Cherokee video series. --Kiernan Maletsky

Lulus Kelly Wells puts her music where her mouth is. As the director of the Folk School, Wells helps connect St. Louisans of all skill levels with American folk music through lessons, concerts and dances. But when her nine-to-five job is done, Wells joins up with sisters Anne and Colleen Williamson and Hannah Arnson to spin out classic, Southern-speckled old-timey music as the Lulus. As scholars of our country's songbook, these ladies bring prowess and studied technique to these originals and traditionals via fiddle, guitar, upright bass, hammered dulcimer and more acoustic instruments. But the wit and sparkle in these songs show that the Lulus are not slaves to tradition -- listen to "I Wish I was a Single Girl Again" and you can hear the wink in the players' eyes as they list out a modern woman's dilemma. The music sounds straight out of 1932, but the lyrics ring true today. --Christian Schaeffer

Ryan Spearman Like any folk musician worth his salt, Ryan Spearman throws himself fully into his work becoming a jack of all trades in the process. The artist dons several hats to bring his music to the people, including as a singer, songwriter, musician, promoter, activist, open-mic host, educator and more. As an instructor for the Folk School of St. Louis, Spearman passes along his considerable skill as a guitarist and multi-instrumentalist to other aspiring musicians. His own music is warm and sweet with a depth that is easily accessible to all. He manages to bring topical issues to light without donning the cape of a heroic protest singer. On his 2011 album, Get Along Home, Spearman discusses American values alongside Cardinals baseball great Willie McGee in a tone that's neither preachy nor pretentious. His affable Midwestern nature shines through, giving his work a genuine quality that draws the listener in and allows her to gauge the quality of his songs for herself. --Scott Allen

The Skekses Fronted by Elly Herget's sympathetic drawl, the Skekses produce world-weary folk so stark and introspective that it could soundtrack both a Wild West film and a Diablo Cody vehicle. (Actually, the now-defunct HBO show Deadwood would be perfect.) Funneled through lyrical references to crime, love and metaphorical monsters, that lilt partners with tender, paired-down instrumentation dedicated to the sounds of yesterlust: temperate banjo, acoustic guitar, upright bass and lazy, wandering beats measured out through maracas and tambourine. The group, which has seen several lineup shifts since its inception, has expanded into a regular trio and occasional quartet. The band hit its stride and signature with its 2010 debut, Notes on the Collapse of an Alternate Universe, and features on Tower Groove's latest label compilation. The first full recording with the current lineup, Curse My Name, comes out June 8. --Kelsey Whipple