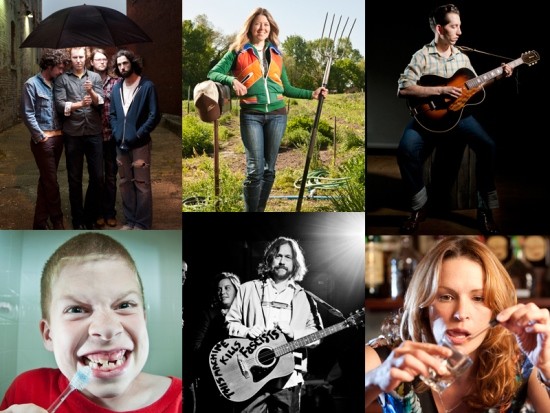 A local photographer is commemorating Woody Guthrie's 100th birthday by giving a modern twist to a series of resolutions the iconic singer made back in the 1940s. And he's launched a Kickstarter drive so that his work can be showcased to the general public.

Guthrie - an Oklahoma-born folk singer and political activist - created his "New Years Rulin's in 1942, a list of 33 aspirations for the coming year. The Rulin's encompassed everything from professional goals ("Write A Song Every Day") to personal hygiene ("Wash Teeth If Any") to political beliefs ("Help Win War - Beat Facism").

Freelance photographer Corey Woodruff made a personal challenge at the beginning of the year to capture all of Guthrie's resolutions through photography. In an interview with RFT Music, Woodruff says he originally was going to use local musicians - such as Pokey LaFarge - to recreate the old pictures of Guthrie. But he decided later to expand the project.

"As I started thinking about it, I thought 'why not do a photo for each resolution or rule on the list?'" Woodruff says. "And it basically snowballed from there. My only rule that I gave myself was that I would have it done in time for Woody's 100th birthday, which is July 14."

Woodruff says there will be 32 photographs when the project is complete, including one that combines two of Guthrie's resolutions. He says that he wanted to photograph people that were "inspired or influenced by Woody Guthrie in some way whenever possible." That included musicians such as LaFarge and Ha Ha Tonka; activists such as AFL-CIO field communications staffer Cathy Sherwin and even a dog named Arlo.

"For the most part it's worked out," Woodruff says. "Most of the people I've photographed are either fans or heavily influenced by his work, like Pokey and the musicians obviously. And then other folks are influenced by his activism, his work with migrant works and labor rights and stuff like that."

"In one case, I had to photograph a kid for one of the pictures," he added. "Obviously he has no clue who Woody Guthrie is, but it's kind of cool to introduce some folks to him who don't entirely know what Woody Guthrie is all about."

After contemplating what to do with the photos, Woodruff decided to hold a one-night exhibition on July 13 - the day before Guthrie's birthday. The costs of such an endeavor aren't cheap, so he launched a Kickstarter to pay for the costs of printing, framing and mounting the photographs. The cost will also go toward licensing fees to the Woody Guthrie Archives, which allowed Woodruff to reproduce his "Rulin's" for the exhibit.

As of Monday night, Woodruff's Kickstarter has raised $705 of his $2,500 goal. Considering Woodruff has until June 6 to reach his goal, it's fair to say he's off to a good start. Woodruff says if he goes over his goal, he may provide extra funds to support Guthrie-inspired charities or possibly create a traveling exhibit of the photos.

In the meantime, Woodruff is happy with the enthusiastic support he's received from some of the subjects of his photos.

"Everyone involved in the project has been incredible," Woodruff says. "What really shocked me is every single person I've dealt with has either made a really cool suggestion about how to make the photo better or came up with a completely cool idea out of the blue."

"The project is just as much theirs as it is mine," he adds.

For more information about Woodruff's project, click here to go to his Kickstarter page.

For a complete list of the Rulins, page down.