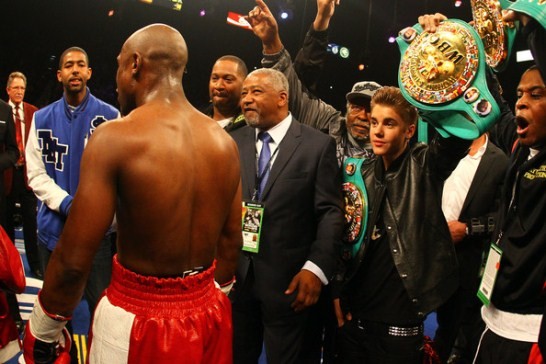 Whether Justin Bieber is being chased by a pack of fans while riding a Segway or pretending to get shot and killed on a popular television show, he can is increasingly dispatched in any setting.

Your moment of certainty came this weekend, when Bieber and 50 Cent accompanied Floyd Mayweather, Jr., to the ring before his fight with Miguel Cotto. Mayweather also had Lil Wayne and WWE superstar Triple H in his posse, making for one of the weirdest entourages in modern history.

Bieber's cameo is merely the latest chapter in the longsanding relationship between boxing and music. Performers have often associated themselves with boxing and boxers to provide an aura of toughness, as evidenced by LL Cool J's "Mama Said Knock You Out." And some boxers have even teamed up with musicians, perhaps to broaden appeal. Now that Bieber is of age, he's obviously looking to start gaining older fans.

Here's a look at some more memorable moments where boxing and music intersected:

Tyson was out of boxing for a couple of years after the, uh, incident with the ear. When he returned to squash Botha in 1999, he came to ring while the intro to DMX's It's Dark and Hell It's Hot was playing. The song turned out to foreshadow the fight for Botha, as Tyson dispatched the South African fighter in short order.

Tyson turned to DMX's music again when he faced off against Lennox Lewis, using the song "What's My Name" while walking to the ring Lewis obviously wasn't intimidated by DMX's verbiage, since he beat Tyson in that fight.

Bieber may have obtained his ubiquitous tendencies from Snoop Dogg, whose penchant for cross-promotion is legendary. The rapper edged into the boxing world back in 2009 when he teamed up with Tyson to promote EA Sports' Fight Night: Round Four.

After four rounds of button mashing inside a boxing ring, Snoop Dogg emerged victorious. The loss probably was not unfamiliar for Tyson, who went through a pitiful losing streak near the end of his career.

Micky Ward and the Dropkick Murphys

Long before his career was popularized by Mark Wahlberg in The Fighter, Micky Ward was given some positive publicity through a tribute from the Dropkick Murphys. Not only did the group write a song about the Lowell, Mass., native called "The Warrior's Code," but they also put Ward's picture on the cover of an album of the same name.

A live version of that song was featured in The Fighter, a film that won Christian Bale an Academy Award for Best Supporting Actor. Floyd Mayweather vs. Oscar De La Hoya

Saturday was the five-year anniversary of Mayweather's fight with Oscar Del La Hoya, arguably the most hyped boxing match in modern history. Mayweather's historic win was nearly overshadowed by his entrance, in which he walked to the ring wearing a backwards sombrero. Mayweather's outfit was so ridiculous that it could be forgotten that 50 Cent was by his side rapping.

50 Cent has been something of a running motif for Mayweather's entrances over the last few years. Since he's yet to lose, it could be argued that 50 Cent is Mayweather's - wait for it - good luck charm.

Even though Mayweather's celebrity-heavy introductions may be a little obnoxious, they're still relatively simple. That's especially the case compared to the Klitschko brothers, who have often choreographed borderline ridiculous introductions to popular music.

Wladimir Klitschko took things a little further than a lot of his boxing contemporaries when he made an appearance in Chris Cornell's video for "Part of Me." The boxer - nicknamed "Dr. Steelhammer" after he received a doctorate in sports science - also showed up at some of the Soundgarden singer's concerts when he was a solo artist. This takes the award for most unlikely boxer-musician collaboration, to the say the least.

Even though Apollo Creed and Ivan Drago are fictional characters, they happen to be a part of the greatest confluence ever between boxing and music. That's because the legendary James Brown provided an over-the-top performance of "Living in America" during Rocky IV, which for years was the highest-grossing sports movie of all time before The Blind Side came out.

Brown's performance was obviously the highlight of that fight, considering that Drago literally beat Creed to death. The result of the not-actually-real fight was a bummer and a half, but "Living in America" became a hit for Brown. He later won a Grammy Award for Best Male R&B Vocal Performance for the song.

Bieber may be versatile, but it's highly unlikely he would be able to lead Carl Weathers to the ring as good as Brown did.